Wendi and Todd talk about steroids in sports and who takes steroids and why. 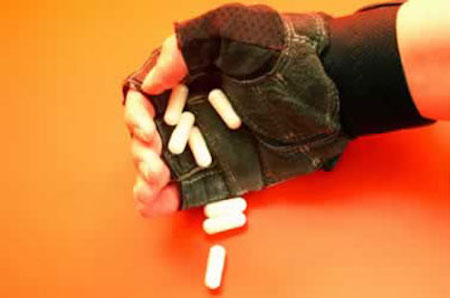 Todd: Talking about body alterations, I think for men it's not so much cosmetic surgery, but it's steroids these days. That's the hot topic.

Wendi: Do you think so?

Wendi: But do you think that currently, that kids are into steroids? Are you thinking of like athletic, for athletes type thing, or are you just thinking guys that wanna look big and stuff?

Todd: Well, that's a good point like I'm older now. I'm 36 and I haven't been in the states in awhile but when I was in university up until 22 it was still quite a common thing.

Todd: And I think athletes do it because they can get money. That know that...

Wendi: Oh, for sure. Yeah, I think definitely in the high school kind of sports scene, I think that there are a lot of youth taking steroids as performance enhancers.

Wendi: But when I was in high school, I knew some guys who were taking steroids just to look good. Well, what their concept of looking good was, which I thought was not good at all, but I know they were taking it because they thought bigger was better kind of thing, but yeah.

Todd: Now they know, all these things it can do to your body. It can give you cancer.

Todd: I mean, so it's the same thing with the implants that you were talking about earlier. Why would you do anything to your body that could be such a risk? I mean, it's just not worth the risk.

Wendi: But I guess that's not the perspective because like, it's all about right now is the moment and people don't really think of life as being like, like something that comes and goes. Like your life is your life and it's like it's here and it's here forever kind of and I don't think that people really put it into perspective, like actually like in the blink of an eye it can all be gone.

Todd: Rigth. Which is true. In a blink of an eye it all can be gone.

Wendi: Yeah, it all can be gone incredibly easy.

Talking about body alterations, I think for men it's not so much cosmetic surgery.

Here, 'body alterations' refers to intentional changes to your body. These can be through surgery or medication. Notice the following:

I think that there are a lot of youth taking steroids as performance enhancers.

Here, a 'performance enhancer' is a drug that helps you do something better than you could naturally. Notice the following:

I don't think that people really put it into perspective when they put their life at risk.

'Putting something into perspective' means to compare a certain situation with a similar situation to get an idea of how things really are. Notice the following:

They put their life at risk.

Putting something 'at risk' means that you are putting it in a situation where something bad could happen. Notice the following:

the blink of an eye

I don't think those people realize that in the blink of an eye it can all be gone.

Here, 'in the blink of an eye' is used to show that something can happen or change before you even know what is happening. Notice the following: