Wendi talks with Ken about his favorite movies. 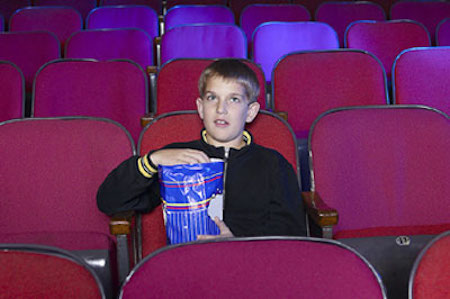 Ken: My favorite movie ever? OOh!

Wendi: Come on, you can be honest.

Ken: I did watch it twice. I fell asleep the second time.

Wendi: Did you seriously watch it?

Ken: No, cause it came out when I was in 9th grade.

Ken: Just blossoming into adulthood at that point.

Wendi: So you wathced it kind of for rules on how to be with girls?

Ken: Yeah, it's a little, you know, a little eye candy.

Wendi: That's awesome. So you loved the movie.

Ken: No, not Titanic. My favorite movie was Jurassic Park actually.

Wendi: I hated that movie.

Ken: I really liked them. I had dinosaur t-shirts. Like my parents would always buy me dinosaur books. Like I could name every single dinosaur. I can't anymore but I could. Like I was really into it. I wanted to be a paleontologist.

Wendi: But, I've met so many eight-year old boys that are dino-crazy. What's up with that?

Ken: I don't know. I can't explain it. It's like their cool you know. You know some kids like cars and trucks and stuff. I like dinosaurs.

Wendi: Yeah... You know, like, but I still can't put my finger on it, because when I think about it, I, like when I feel attracted to a man, I know what I'm attracted to, like so when you think about how you're attracted to dinosaurs, what is the draw?

Ken: Ah, but you don't think about that when you're eight-years old.

Wendi: I guess you're right.

Ken: But, like I guess in retrospect the draw is that, these dinosaurs, they're so strong and powerful and yet mysterious because, you know, you've never actually seen one. You can only look at pictures or go to a museum and look at the skeletons. Yeah, and...

Wendi: When I was young, it was the unicorn, for me.

Wendi: Yeah, because there was this song that I used to sing all the time and it had a unicorn in it, and I was always just like, "Man, it'd be so amazing to see a unicorn."

I watched that movie when I was in 9th grade, just blossoming into adulthood.

Here, 'blossoming' is similar in meaning to developing. When you blossom into something else, you are changing into that thing slowly. Notice the following:

I find Titanic to be a movie that is just soft touching.

In this case, 'soft touching' refers to the sexual encounters between the characters in Titanic, which were new and exciting for Ken. Notice the following:

I liked the movie because it had no serious crazy nasty stuff going on.

Titanic and that kind of movies are a little eye candy.

Attractive people can be called 'eye candy,' because they are enjoyable to look at. Notice the following:

What's up with eight-year old boys being so dino-crazy?

The question phrase 'What's up with...?' is used to ask the reason for something that you think is a bit weird. Notice the following: