Wendi and Ken talk about watching TV as a youngster. 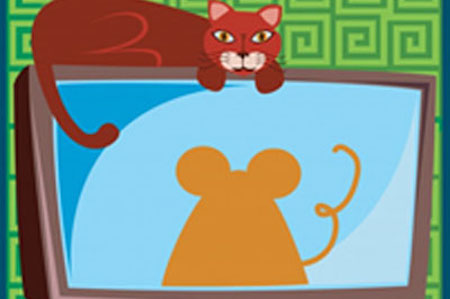 Wendi: OK, so the next thing was when I was young, I used to watch this TV program. It was called the "Wonder Years". And I had such a crush on that kid Fred.

Ken: Fred Savage was it?

Wendi: Yeah, yeah, Fred Savage. What was his name in that show?

Ken: I actually never really watched that show. No, I've seen a couple of reruns.

Wendi: I know he had a crush on some girl names Wendi but I can't recall what his name was, but I has such a huge mad crush on him.

Wendi: Yeah, I think so.

Ken: Was that him?

Ken: That was him?

Wendi: It's the same guy and he's an adult and he's not attractive or cute whatsoever and so I just feel really betrayed.

Wendi: OK, so I told you about an actor I had a crush on when I was young. So what show did you grow up on that you totally had a crush on - one of the actresses?

Wendi: Are you serious?

Wendi: Were you really?

Ken: I did not grow up watching TV. Yeah. I was not raised on TV.

Wendi: You weren't raised on TV at all?

Wendi: So, were taking Monday to Friday, no TV?

Ken: I'm talking I had to, like while my mom was cooking dinner, I could like turn the volume really low on a nine inch black and white TV and maybe catch five minutes of Teenage Mutant Ninja Turtles or something.

Wendi: Are you serious?

Ken: That's how bad it was.

Wendi: Yeah, so then at like what age did you, because you know how to work a computer quite well, when did you learn all this stuff?

Ken: I guess once my brother and sister started growing up, then my mom, you know, let me have a little bit more freedom.

Ken: We got our first computer. I was more into computer than TV, initially.

Ken: And the first Tv show I watched regularly must have been like the Simpsons, probably.

Wendi: How old were you?

I used to watch "Wonder Years" and I had such a crush on that kid Fred.

'Kid' is an informal word for child. Notice the following:

I never really watched that show, but I've seen a couple of reruns.

A 'rerun' is a show that has already been played on television but is now being played again. With many popular shows, that television channels will continue to play old shows, even after new shows are no longer being made. Notice the following:

I can't recall what his name was on the show, but I had such a huge mad crush on him.

A 'mad crush' means a 'big crush.' You have a crush on someone when you like him in a romantic way. Usually we use 'crush' to talk about someone we don't know well, have never met or think we have no chance with. Notice the following:

A 'narrator' is a person who tells a story or adds extra comments to a story, television show, performance or movie. The narrator is not always a character in the performance, and usually you can't see him when he is narrating; you just hear the voice. Notice the following:

Unfortunately, I was banned from watching TV as a child.

When you are 'banned' from doing something, you are not allowed to do it. It is prohibited. Notice the following: