Jeff recently made a film with his brothers. He talks about the experience. 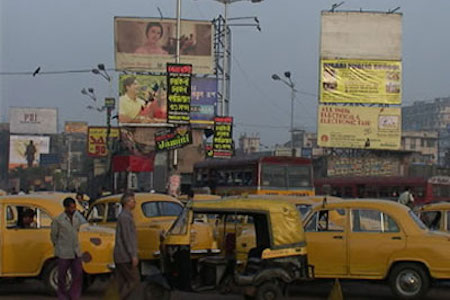 Todd: OK, now Jeff, you made a movie recently. Can you talk a little about what your movie is about?

Jeff: OK, Todd, I want to qualify that it is not a movie. It's a television documentary. Very big difference, but actually a movie and a documentary, there's not a lot of difference. I think the main difference is probably time. There's a beginning and a middle and an ending to both, but television documentary must be done in 46 minutes plus commercials and a movie is two hours or three hours.

Todd: OK, well thanks for that. OK so it's a documentary. What is the documentary about?

Jeff: Our documentary is about Indian life, and about our life interacting with the Indians. We're driving a small auto-rickshaw, which is a three-wheeled. It's a three wheeled car, a mini-three-wheeled car without doors and it doesn't go very fast and it's very uncomfortable and we drive that from the eastern border at Bangladesh to the western border of Pakistan, and we drive it straight across to Northern India.

Todd: Wow, that's some idea. Where did you get this idea? Why did you decide "Hey, I'm going to go film you know, going across India?

Todd: Wow! Well if you had to describe your trip or sum up what the whole experience was like, how would you describe it?

Jeff: I think the best word to use to describe the trip was stupid! I don't think anyone would recommend doing it to anyone. I wouldn't do it again and it was very dangerous. It was very uncomfortable. It was very hot, very noisy. It did nothing. I think the main thing it did was take a few years off my life but it was an experience. It wasn't fun but it was a good experience.

I want to qualify that it's not a movie but a television documentary.

When you put restrictions on information, you can say that you are 'qualifying' it. Notice the following:

We drive a small auto-rickshaw which is a three-wheeled car without doors.

Traditionally, rickshaws are transportation with a cart and a bicycle used for getting around a city. Now, instead of using a bicycle, people are using motorcycles and these are called 'auto-rickshaw.' Notice the following:

The 'eastern border' of a country is the edge of the country on the east side. Notice the following:

The idea just popped up in our heads as we were kicking around certain ideas.

You 'kick around' ideas when you are just saying any idea that comes to your brain as an option. Someone says an idea, and then the rest of the people say what they think about the idea or how it could be made better. Notice the following:

spur of the moment

The idea was just an inspirational, spur of the moment thing.

When you do something 'spur of the moment,' it means that you don't plan it in advance, but just do something when the opportunity comes up. It is a spontaneous decision. Notice the following: