Mariel talks about her country of Finland, the people there and why she loves it. 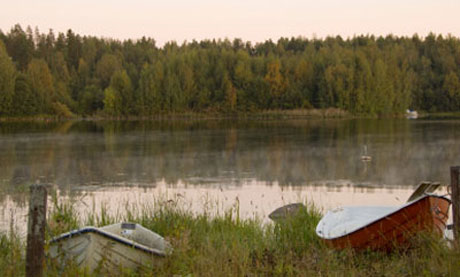 Todd: Mariel, you are from Finland.

Todd: What city are you from?

Mariel: I live in a city called Espoo, which is right next to Helsinki, but I was born in the center of Finland in a place called Jyvaskyla.

Todd: Right in the middle?

Mariel: Yeah, pretty much right in the middle.

Todd: So is that way out in nature in the forest, or is it a big city?

Mariel: It's a reasonable size city, maybe the fifth largest in Finland, but it is very, a very natural place still. It's surrounded by lakes and forests and lots of cliffs and really beautiful scenery. Yeah.

Mariel: Yeah. Yeah, I love it there. I go back there every year to visit my hometown.

Todd: Now does your family still live in your hometown?

Mariel: No, they live down south near Helsinki.

Todd: OK, is that common? Everybody moves to the big city.

Mariel: Pretty much, yeah. Especially young people. They want to get jobs and go to schools near Helsinki. Yeah.

Todd: Now is Finland part of the European Union?

Todd: OK, so because it's part of the European Union do a lot of young people decide to leave Finland and go live in other countries?

Mariel: The Finnish young people are actually very outgoing and they're very interested foreign cultures so a lot of people take a year or two just to travel, just to see the world, visit some places, and yeah, a lot of people go out to other countries to study as well. Yep, mainly Europe but also a lot of my friends for example went to India for six months or to South America.

Todd: But because you're in the European Union, you can go live in France or Germany or Spain if you want, correct?

Todd: But do most Finnish people prefer to stay in Finland or do a lot of people like to go move to warmer climates?

Mariel: Finnish people are very patriotic. We really love our country. We like to visit other places, but I think even if we live abroad for a long time most people always some back to Finland. I think especially if they want to have a family because Finland is a very safe place and it's very good to raise your kids in Finland.

Mariel: Yeah, I think so. You should come and visit.

Pretty much right in the middle.

The term 'pretty much' is similar in meaning 'almost.' Notice the following:

It's a reasonable size city.

When something is reasonable, that means we are happy with it or it is acceptable.w Notice the following:

'Yep' simply means 'yes'.  It is informal and used more frequently in spoken rather than written English.  Notice the following:

People who are patriotic love their country.  Notice the following:

It's good to raise your kids in Finland..

To 'raise your kids' means to take care of them as they grow up.  Notice the following: