Todd asks Anita about her time in San Francisco and what she thought of his city. 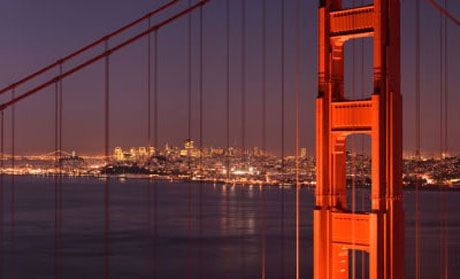 Todd: So, Anita, have you been to San Francisco?

Anita: I have been there once a long time ago when I... well, not that long but when I was twelve years old I went there with my family.

Todd: Great. You know, I'm from San Francisco so what did you think?

Anita: I think it was a very beautiful city. You had... there's so many nice houses in these little winding streets, you know, going up the hills and down the hills, and you get the old, the historical trams.

Anita: The cable cars, and the Golden Gate Bridge is beautiful of course.

Todd: Yeah, actually I think the Bridge is still pretty amazing. I mean, even people that live there, it's just an amazing thing to look at, to cross. It's nice. But one thing about my city is it's really expensive. Did you find it expensive when you were there?

Anita: Well, thankfully I went there as a child so my parents paid for everything, so I didn't have to worry about that so...

Anita: If I went there now, I mean, probably I would be worried about that, yeah.

Todd: So, OK. Well, when you were in America did you enjoy American food?

Anita: Yeah. I like any kind of food, so... I don't like to eat too much fast food but I didn't have any problems now that I recall, now that I remember so... It was OK.

Todd: Right. Yeah, but in America we don't eat that much fast food, at least not in San Francisco.

Anita: OK, I'll take your word for it.

Todd: Did you talk to anybody, or did you meet people?

Anita: In San Francisco, not that I remember. Of course, we talked to people we met but we didn't visit friends. We just went there as tourists and you know, took a couple of tours, so yeah we talked the tour guide who lives there, and it was nice meeting somebody from San Francisco.

Todd: Now, my favorite part of the city is... there's two places actually: Golden Gate Park and also the Presidio. The Presidio is also a park. Did you go to either of those?

Anita: I think we did. I don't remember them very clearly but all the major sites that are there we definitely went to. It's hard to miss.

There are so many nice houses in these little winding streets.

A 'winding street' has many curves and bends. It isn't straight.  Notice the following:

We got to see the historic trams in San Francisco.

A 'tram' is a train that travels around the streets of a city.  Notice the following:

I think the Golden Gate Bridge is pretty amazing.

Something that is 'pretty amazing' is so good or so surprising that we almost can't believe it.  Notice the following:

Did you find it expensive when you were in San Francisco?

To 'find something to be a certain way' means to learn some information or express an opinion about it.  We can replace 'find it' with 'think.'  Notice the following:

We took a couple of tours in San Francisco.

A couple of means two.  Notice the following: