Anita talks about her home city of Prague and how it is has changed over the years. 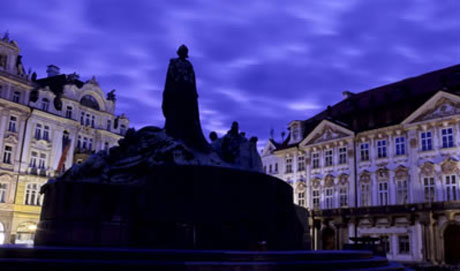 Todd: Hello, I'm here with Anita. Anita, where are you from?

Anita: I am from the Czech Republic.

Todd: Oh, and what city?

Todd: Can you talk a little bit about your city?

Anita: OK, Prague is a very historical city. It's got many, many old buildings. It's very popular among foreign tourists, especially. The main attraction is the Prague Castle, which is right in the city center. That's where the President has his office.

Todd: Inside the castle?

Anita: Yeah, in the castle.

Anita: Yes, yeah, it's really beautiful. Of course you can't go into his offices, but you can go into the premises of the castle and walk around and there's a very big cathedral right in the middle of the castle and it's absolutely gorgeous.

Todd: Now, actually, I saw the castle many years ago, about 12 years ago, and if memory serves it was built by the Romans? Or am I wrong?

Anita: I'm not very good in history, so I'm sorry.

Anita: I'm not sure.

Anita: But, one of our late last kings. He was an emperor of Rome as well.

Anita: Something to do with Rome. Anyway.

Todd: Somebody will probably write me now and tell me the history. And there's also a really famous bridge correct?

Todd: So, it must be nice to be living in a city with so many beautiful buildings and history.

Anita: It is. You know, I mean, of course it depends where in the city you go because the city center is the historical part but when you go to the outskirts of the city, that's where it is... that's where you get buildings from the Communist era, so it's not colorful. It's all grey. It's all one style and it can get pretty ugly in some parts, but if you stick to the city center it's gorgeous. It's like a fairy tale.

Todd: So would you say then that your city is a mix of new and old?

Anita: Um, I probably wouldn't say a mix of new and old because they're not mixed in one place.

Anita: It's old in the center and then new, not modern... I wouldn't say modern, but new, Communist new in the outskirts, so it's separated. It's not mixed together, which is good because when tourists come they don't get to see the ugly parts as much.

Todd: It's like in the States. Believe me, every city has it's ugly parts.

Prague is a very historical city.

A 'historical city' has many old buildings that let us see and learn about how people lived in the past.  Notice the following:

The main attraction in Prague is the Prague Castle.

Here, the 'main attraction' is the most interesting building for tourists to see.  Notice the following:

There are many beautiful buildings at the outskirts of the city.

The 'outskirts' is the area furthest from the the city center.  Notice the following:

Buildings from the communist era are not very colorful.

The 'communist era' in Czechoslovakia lasted from 1945 - 1989 during which the country lived under communist political rule.  Notice the following:

Would you say that your city is a mix of new and old?

'A mix of' things is a combination of many things that together form one group.  Notice the following: