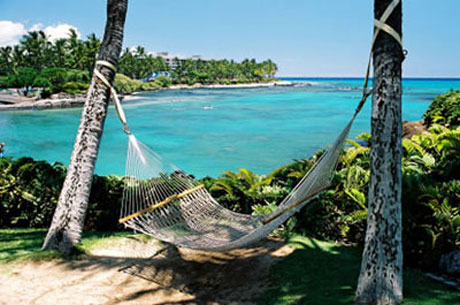 Mari: This week's theme is comparing cities. Mike, you've lived in both Florida and Hawaii, and both of these places, people go there on vacation, so can you compare the weather?

Mike: Well, actually both places are warm most of the year. Well, actually Hawaii is warm all year. But I would say that Hawaii's weather is probably better than Florida because the weather in Hawaii is not as extreme as it is in Florida and... so where as the temperatures in Florida would range from fifty degree to ninety degrees, in Hawaii it would stay between seventy-five and eighty-five degrees most of the year.

Mari: Wow. That's really nice weather. How about the food?

Mike: Well the food, in both places are really good but it's quite different. Both places of course you can get good American food, like burgers and that type of thing, but in Florida you get a lot of foods such as Cuban food or Jamaican food which is really good that you can't get in Hawaii, but in Hawaii there's a lot of Asian influence so you can get really good Japanese food or Thai food, but also traditional Polynesian food as well.

Mari: Wow. Sounds yummy. How about the shopping?

Mike: Well, the shopping varies between both places. Florida is a lot cheaper than Hawaii. Food shopping as well as clothing and that sort of thing. I guess in Hawaii everything has to be shipped over so it's a little bit more expensive.

Mari: I didn't know that. How about the night life?

Mari: If you could live in one place, where would you live?

Mike: I would choose to live in Hawaii. Well, I'm from Hawaii so I have a bias towards it, but I think Hawaii would be better between the two places for me.

The weather in Hawaii is not as extreme as it is in Florida.

'Extreme' is similar in meaning to serious or intense.  Notice the following:

A 'range' has a first number, a last number and includes all or select numbers in between.  A range of 4 to 7 for example, is 4,5,6,and 7.  Notice the following:

that type of thing

You can get burgers and that type of thing.

Here, the word 'type' talks about things that are similar. We can use this phrase when we want to give a general idea, but don't want to list a lot of examples.  Notice the following:

There's a lot of Asian influence.

Here, 'influence' talks about the way one culture affects another. Hawaii is a US state, but you can see a lot of Asian influence there.  Notice the following:

'Yummy' means delicious. Its very informal and usually spoken by women and children.  Notice the following: