Rebecca talks about the Great Barrier Reef and her thoughts about scuba diving. 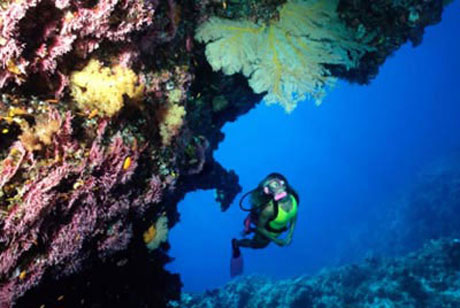 Rebecca: Yes, I have once, probably about two years ago. There's the main part of the Great Barrier Reef and then there's a little island, and we went to the island because I don't like scuba diving, so I didn't go to the main part.

Rebecca: I think it's the unknown, under the water, and just being confined and having this breathing aparatus on you.

Todd: Right. Well, you know what, I can relate because I was certified to be a diver because all my friends were divers and I didn't enjoy it that much either.

Rebecca: Yeah. Like, it looks great underwater when you see it on TV and it would be awesome to see it, but yeah, I just can't get past the going underwater and not being able breathe properly.

Todd: Right. Right. Actually, I think for me was I went with my friends and they were so excited about it and then when you would go under water, you're in pairs. You have a buddy and it seemed like you were kind of in line in an amusement park or something, you know.

Todd: Yeah, like everybody kind of has to go around and you look around and you see all these other divers and... but I was the only person that felt this way. Everybody else loves diving and the photography so. But actually, is it true the Barrier Reef is being damaged? It's actually not as beautiful as used to be?

Rebecca: Yeah. It's... The name of it is coral bleaching, and the coral is actually turning white, now rather than having the colors it has, so that's been happening for a few years I think and it's getting worse and worse.

Todd: Oh, so basically the coral is losing it's beautiful color?

Rebecca: I assume that would probably go down as well once the coral starts to die off because that is the food source and their housing for the fish so with the loss of the Great Barrier Reef you also lose all the beautiful fish and marine life down there too.

It's the unknown under the water.

We use the phrase 'the unknown' to talk about an experience we have never had and maybe are a little scared to try.  Notice the following:

It's having this breathing apparatus.

The word 'apparatus' means machine. It can be high-tech or very simple.  Notice the following:

I can relate because I'm a diver.

We say 'I can relate' when we understand someone's feelings, usually because we have had the same experience.  Notice the following:

I just can't get past

I just can't get past going underwater.

When we 'can't get past' something , that means we are blocked from doing something because of it. Usually we use this phrase when the problem is in our mind.  Notice the following:

it's getting worse and worse

I think and it's getting worse and worse.

We use the phrase 'getting worse and worse' to talk about a problem that is slowly increasing.  Notice the following:

It just dies and can't be brought back.

Here, 'bring back' means to repair something that is old, lost or damaged.  Notice the following:

unknown • apparatus • relate
get past • getting worse • brought back