Rebecca talks about the drought in Australia and how people deal with it. 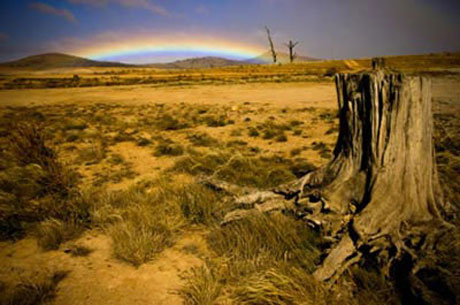 Todd: So, hey, Rebecca, speaking of environmental stuff, I was reading about a drought in Australia. You guys have a serious drought problem with water?

Rebecca: Yeah, we do. We've had a drought for some time now and it seems to be getting worse and worse each year. At the moment, it depends on the area that you're in, but some areas are quite hard-hitted. We actually have restrictions on water now so you can't wash your car unless it's with a bucket of water. You can't water your garden at all, so my mom loves gardening, so to keep her garden, dad actually has fitted a special tube into the washing machine which filters the water out out into a bucket outside and she can use that grey water to water all her plants and that way she can keep her garden all nice.

Todd: Is it only water from the washing machine?

Rebecca: Yeah, it is. We haven't done anything else with the shower water or anything, yet, and I think with the soaps that we use, they're more... not as hard on the plants, so they're actually growing really well.

Todd: Oh, really. Actually, the garden is doing better with the grey water than normal water?

Rebecca: Yeah. Especially grass. Yeah, I don't know, maybe something in the water that they really love.

Todd: Right. All those dirt nutrients from the clothes.

Rebecca: From the clothes, yes.

Rebecca: There's a certain limit on water and then after that limit's reached, you actually pay quite a fair bit for water. Bottles of water have gone up to about three to four dollars for just a hundred-fifty mil-bottles, so it's quite expensive. Yeah, so water prices are quite high now.

Todd: So, basically, everybody in Australia just has to hope that in the future there'll be more rain?

Rebecca: Yeah. Yeah. Definitely. I think the problem is that with the rains, it needs to rain into the basins where we catch the water so, if it doesn't rain into them, then the water's just useless to us when it rains. It just runs offbecause the ground's so dry.

Todd: Right, you just have the run-off.

Todd: So, have you had other things like flooding or anything like that because of the drought?

Rebecca: In certain areas when there's been big rainfalls, there has been a lot of flooding because the ground just doesn't soak it up. It's that dry, but other areas have got water so because Australia is so vast, so wide as well, yeah, there's different areas that are hit differently.

Todd: Ah, that's terrible. Well, I hope it gets better.

Water is about four dollars for 150 mil-bottles.

'mil' formally written 'M-L' is a spoken short form of the word milliliter. There are 1000 milliliters in one liter.  Notice the following:

It just runs off because the ground's so dry.

The verb phrase 'run off' describes the action of a liquid, usually water, when it hits a dry solid surface.  Notice the following:

You just have the run-off.

'Run-off' the noun form talks about the flow of rain water or snow-melt into rivers, seas or oceans. The best example of this is the water we see on a rainy day that runs into the sewers along the side of roads.  Notice the following:

The ground doesn't soak it up.

The verb phrase 'soak up' means to same thing as 'absorb'.  Notice the following:

Australia is so vast.

A 'vast' area is very, very big.  Notice the following: