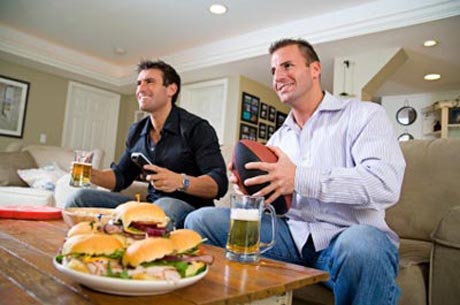 Todd: So, Melissa, the Super Bowl is coming up. And what do you think about football?

Melissa: I think it's really interesting. This Japanese guy recently told me it was the most interesting sport to watch because of the rules, but unfortunately I don't really know the rules so I have a hard time following it.

Todd: But you're American. You don't like American football?

Melissa: I'm more of a basketball fan cause when I watch it, I can easily understand what's going on, and when I'm watching football, everyone around me just screams and they don't really tell me what's going on.

Todd: Right. But the Super Bowl - that's like the biggest game of the year right! So you go to Super Bowl parties, right?

Melissa: Yeah, my sister's crazy about football and she has Super Bowl parties but I haven't really lived in America for the past three years, and before that I was in college and I never really went to one. How about you?

Todd: But the thing I think is great about Super Bowl Sunday is it's really ... it's like the silent American holiday.

Todd: You know what I mean? Like it's the one day where everybody gets together and watches the game and has a good time.

Melissa: Well, I'm from Philadelphia and Philadelphia fans of all sports are totally wild and crazy, and they just go all out, so a lot of my family members and friends go crazy about the Eagles' games.

Todd: So have you ever been to a professional game?

Melissa: I haven't. I haven't been to a professional football game.

Todd: Now, what about college? Did you have a big college team?

Melissa: No, I don't think so. We had a good basketball team at the University of Arizona - The Wildcats, but ....

Melissa: To be honest, I can't remember watching the Super Bowl in recent years.

Todd: Here it is. I'm saying it's the biggest day of the year, and you don't remember ever seeing it?

Melissa: I mean, I remember watching it, but they're just ... I remember like being more into the food that was all around me.

Melissa: Sorry. But if you invite me this year I'll come.

I don't really know the rules.

Rules tell us what we can or cannot do. Note the following:

I have a hard time following it.

When we have a hard time following something that means it is difficult understand.  Note the following:

I can easily understand what's going on.

The phrase 'What's going on' asks about what is happening.  Note the following:

My sister's crazy about football.

We are crazy about something we like very, very  much.  Note the following:

When we are 'into' something, we really like it.  'More into' compares our level of interest. Note the following:

rules • following • going on
crazy about • more into

942 Dog Will Travel
Greg talks about his dog and his travels.
﻿
INT 4
Greg | Todd

941 Dancer the Dog
Greg shares what makes his dog special.