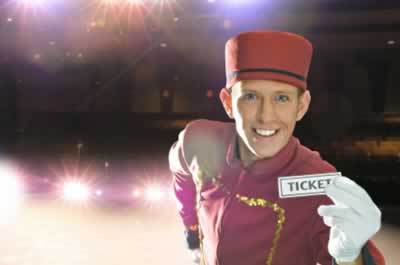 Michael: Alright, so Simon, do you have a favorite movie?

Simon: Again, that's difficult question so I can't say one favorite movie but I can say that I really, really enjoyed The Lord of the Rings, well mainly because as a elementary school student I read the book, and as a small child my father would tell me stories about Lord of the Rings so when they finally came out on the big screen with big money production and awesome special effects, yeah, I was quite impressed. How bout you?

Michael: Oh, I liked it as well, and I read the book when I was in high school. I like the movies a lot but it still doesn't compare to the first time reading the book. The book was fantastic but of all the adaptations of that book this movie is probably the one, or those three movies are probably the one that I enjoyed the most.

Simon: Yeah! That's true! A lot of adaptions are really quite terrible aren't they?

Michael: Which of the three did you like the most?

Simon: I liked the first one. The first one. It has story and it had, you know, what-will-happen-next anticipation and yeah, but all three were good.

Simon: Oh, you like the second one. That's surprising! Most people like the first one the best.

Michael: I like the first one a lot but I like the second one because DeNiro is in it and I like the story of Don Corleone in Sicily as well.

Michael: Yeah, and I think that the real conflict in the story comes out in the second one. More so than in the first. I see the Godfather trilogy to be very similar to a Shakespearean kind of trilogy, tragic, I think that Michael Corleone is a tragic hero and I like Shakespearean trilogies to so perhaps that's why I like it.

I was impressed by the movie's special effects.

'Side effects' are audio or visual effects that are used with a movie, television show or other kind of production to make the presentation more interesting.  These can be computer enhanced images that make the show seem more real for the viewer.  Notice the following:

I like movies, but it still doesn't compare to books.

if one thing 'doesn't compare to' something else they are similar, but one of them will always be better. Notice the following:

It's interesting that your favorite movie is a trilogy.

A 'trilogy' is a three part series. Notice the following:

The Godfather has a flashback scene.

When a character has a vivid memory about the past because they feel some connection to the present it is called a 'flashback.' Notice the following:

I think Michael Corleone is a tragic hero.

A 'tragic' hero has a character flaw which eventually causes his death or destruction. Notice the following: