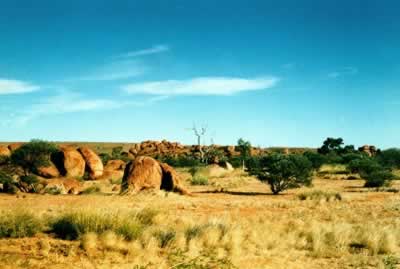 Todd: Aaron, sometimes I hear from Australians, the term, have a walk-about, or walk-about!

Aaron: A walk-about is an aboriginal word. It basically, means an aboriginal boy, when he is growing up goes for a long walk, maybe for twelve months, and he doesn't see his family and he has to live off the land. He can't, he doesn't have money so he can't buy food, he can't buy anything, and he just hunts for food. It's not so common now, and I've never had to do it, but it's more of an old story from the aborigines who tell you about a walk-about.

Todd: Do you know anybody who's ever done it?

Aaron: No, I've never know anybody to do it, but I don't know if it's a true story or, I don't think it's common now, but maybe in the old days, maybe a hundred years ago, it was common for them to do it, but now they don't.

Todd: So, there's lots of different aboriginal people in Australia. Where does, which aboriginal tribe does this come from, or group?

Aaron: OK, I'm not sure what tribe it comes from but the aboriginals in the Northern Territories, which is all desert are probably the most famous for it, near Darwin and the top end we way, the north of Australia, where it's very mountainous, and you could walk for a year, and never find your way anywhere.

The aborigines tell stories about a walkabout.

Typically a 'walkabout' is an informal walking tour which is usually done by important people in the community and is done so that they can be seen by the public. The way that Aaron uses it, however, describes an aboriginal custom for boys to become men.  The boys are sent out on their own with no money or food to survive for one year. Notice the following:

There are lots of different aboriginal people in Australia.

The 'aboriginal people' in Australia are the native or indigenous people who lived there before the land was taken as a territory of the British. Notice the following:

The aboriginals in the Northern Territories are probably the most famous for the walkabout stories.

If a group of people is 'famous for' something many people know that this is something that they do. You can be famous for good or bad things. Notice the following:

Which aboriginal tribe does this come from?

A 'tribe' is a group of people or community that has common customs or cultures. This group usually separates themselves from normal society and may have their own leaders and rules. Notice the following:

He can't buy anything and he just hunts for food.

To 'hunt' literally means to follow an animal to kill it for food. Nowadays we also use hunt in a less specific way meaning to look for something that you need or want. Notice the following: