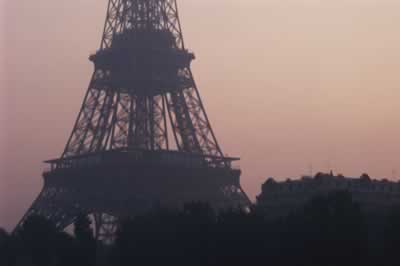 Todd: OK, Raphael, you were saying you lived in Paris.

Rapheal: Yes, I made my studies there.

Todd: Paris is just an amazing city. Can you talk about Paris?

Rapheal:Yes! Well, the biggest difference I noticed with Tokyo is the size. Like Paris is nice in that way, you can go anywhere by walking. It might take at maximum an hour and a half if you want to go to a very far place, but basically it's a city like made for walkers and you can really go anywhere just by walking, I mean it's quite pleasant cause you can see many, you know, nice buildings and places and things, just by walking.

Todd: Wow, that's nice. How many people live in Paris?

Rapheal:Including the suburbs it's 8 million now. Maybe getting increasing, but the inner city is only one million, so it's not overcrowded at all. Yeah!

Todd: So, what else would you say is different about Tokyo and Paris?

Rapheal:Well, specially, Paris you mean? The Transport is less expensive. This is important.

Rapheal:No, it's less, sorry, it's less expensive. Anyway, the, I was surprised because Tokyo is not that expensive finally, I mean you can, you can live in a very expensive way if you want but you can save a lot as well. It's really up to you. But in Paris is quite hard to save. I mean, the food is very expensive, and if you want to go out, just, a restaurant or anything, it's really more expensive than in Japan. A restaurant for example, like prices in Japan start from a thousand yen, maybe less, like 600 yen, and in France like the cheapest restaurant you can find is 15 Euro which is around 2000 Yen

Todd: Whoa! That is expensive.

Rapheal:Yeah, anything. Anything, yeah! You have a lot of facilities, like gymnasium, swimming pools, clubs, yeah, you can practice a lot. Especially, I was a student so, I had this very easy student life because France has a lot of students, whatever it is, so they give you a bit of money, and you get discount on almost anything, so sport is specially favorized in Paris when you are a student, you canalmost like do whatever you want, as a sport almost free, sometimes, so, it's, you can do a lot of things. Actually, I did Aikido. I did swimming pool, squash, tennis, yeah, uh, basketball, yeah, a lot of things actually.

Todd: Active guy. And what about the traffic if you want to drive in Paris?

Rapheal:I never tested, because as I told you it's so nice to just walk, that, and I didn't own a car but it's quite tough for people living in the suburbs cause they need a car to come, the train system is not really good. It's not like, there's a lot of delay, trains and things like that, so if you live in the suburbs you need a car, and driving through Paris in the mornings or evening is really difficult, so I just didn't want to test, you know.

In Paris, you can go anywhere by walking; it's nice in that way.

You can use the phrase 'in that way' to show you are talking about a specific characteristic of a place or person and not speaking in general terms. Notice the following:

The inner city's population is only one million, so it's not overcrowded at all.

If a place is 'overcrowded' there are too many people to move around comfortably. Notice the following:

In France, the cheapest restaurant you can find is fifteen Euro, which is around two thousand Yen.

When we give a number that is not exact just to give a general idea we use the word 'around.' It is an approximate number. Notice the following:

The food is expensive in France; but on the contrary, the cinema is really cheap.

'On the contrary' is used to introduce information that is the opposite of what is being discussed or is different from what people would assume. Notice the following:

Sports is favored in Paris when you are a student.

Something that is 'favored' is preferred or considered very important.  Notice the following:

in that way • overcrowded • around
on the contrary • favors