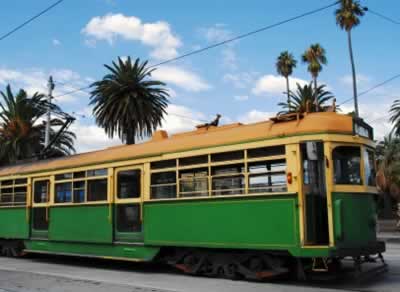 Todd: Now, Aaron, you're from Melbourne.

Aaron: Melbourne's the second biggest city in Australia but there's a big city area with big buildings, then there's a lot of houses and then it runs into the countryside, where it's just hills and mountains and a lot of greenery basically. The city is center is busy but it's not very busy. It's not as busy as Tokyo or New York. It's just a busy city but then it just slows down as you move away from the city

Todd: Is it easy to find housing?

Aaron: It's very easy to find housing. There's a lot of hotels, accommodation, and a lot of places to rent. You can buy houses quite cheaply in Melbourne as well and there's only about 5 million people there so it's not crowded as well.

Todd: How much would a house cost? A decent house?

Aaron: A decent house in Australia, or in Melbourne, would cost about 250,000 Australian dollars, which I guess compared to Japanese prices, isn't so bad, and that would be a big 4 bedroom house, maybe two stories.

Aaron: The transportation is very good, but it's very slow. You have to wait twenty minutes for trains. They only run every twenty minutes, but the buses and the trams will take you to wherever you want to go, but the trains are very centralized, so they all run into the city, through four major train stops, and then they run back out to the suburbs on a big loop so they never crossover each other and you have to catch buses if you want to go away from the city.

Todd: Is it a safe city?

Aaron: It is a safe city but like any place it has it's troubles but you don't have to worry about living in Melbourne.

Melbourne is the second biggest city in Australia.

We put the word 'second' in front of a superlative like 'biggest' to show that we are not talking about the biggest city, but the one that is closest in size or number to the biggest. 'Second' can be used with any superlative. Notice the following:

Melbourne is a busy city, but then it slows down as you move away from it.

If something 'slows down' it becomes less fast or decreases in speed. Notice the following:

A decent house in Melbourne would cost about 250,000 Australian dollars, which I guess isn't so bad compared to Japanese prices.

Use the phrase 'compared to' to show similarities or differences between two things. Notice the following:

The trains in Melbourne are very centralized, so they all run into the city through major train stops.

If something is 'centralized' it means that things are very close to each other.  In a city, this would mean that everything you need would be very near to you. Notice the following:

The trains in Melbourne run back out to the suburbs on a big loop, so they never cross over each other.

If one train route 'crosses over' another it means that they have an intersection or a place where they come together. Notice the following:

second • slow down • compared to
centralized • crosses over