Michael talks about bands he likes. 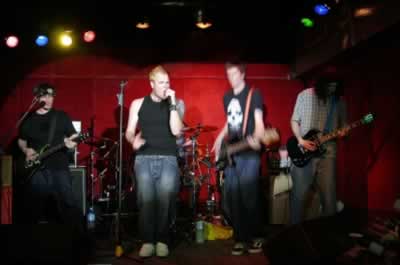 Michael: So, are you francophone?

Simon: No, I'm not Francophone. That's a common mistake that other Canadians make. My parents were German so they use the German pronunciation of Simon, which is Simon

Michael: OK, so the German and the French are.
.
Simon: Pretty similar. Ah, similar! Ah, yeah, Spanish, French, German. Pretty much only English has the Simon pronunciation of that, that name.

Michael: OK, so you're from Vancouver.

Michael: I'm from Toronto but some of my favorite music came from Vancouver. Ah, I'm not quite sure, you look quite young, you may not have ever seen DOA play.

Simon: I'm very familiar with DOA. Actually, I'm older than I look. I'm 33, so I come from the DOA generation.

Michael: Excellent, so did you go to the Commodore Ballroom?

Simon: That's right, and I've actually seen DOA at the Commodore and almost got hit in the head by a beer can that they throw out during their concerts. They like to throw beer cans into the crowd.

Michael: Well, I saw DOA at the university of Windsor where I went to do my undergraduate degree, and it was one of the best shows I have ever been to. It was great.

Simon: Yeah! I mean when I was in high school, they were already old, so but uh, they kept rocking'.

Michael: So how bout the, do you know, how long have you been in Japan? Do you go back and have you seen
any new bands in Vancouver.

Simon: Ah, well, I've been in Japan just over a year so not that long. I did go back one time but we didn't see any concerts and the commodore has changed since those days of DOA.

Michael: OK, just to show you how out of it I've become, but I've just recently discovered Nickel Back which is from Vancouver as well and also a band that I don't think die hard DOA fans would like cause it's pretty conventional rock I guess, but I like them.

Simon: Yeah, I don't. I mean, they've got catchy tunes that many people like, for example my girlfriend who's Japanese loves Nickle Back, but I didn't even know they were from Vancouver. You know, they're just I thought there were from the Prairies or something like that. Yeah, there not cool enough.

Michael: They're not cool enough.

Simon: I think their music is crap.

Michael: Do you really?

Simon: Yeah, it's, I mean they sound the same as any number of bands, you know.

Michael: OK, can you think of any group from Vancouver that is cool? A new band!

Simon: A new band. Well, you've caught me at a time because I'm in Japan and so new music doesn't really resonate here. Is that the correct word to say?

Michael: Well, what's your definition of new then? Is it like a minute old?

Simon: I can't say, you know, you stumped me on new music. Yeah, how bout you? Do you want to tell me about some music that you're listening to now?

Simon: Oh, sure as and ESL teacher, we both have to play, you know, cheesy ballads and things like that for our students because that's what they like. Yeah. OK, let's get back to the music. You know, they're probably already old, yeah, if you want good solid Rock, I mean, the next best thing was The White Stripes a few years ago and their still quite good.

Michael: And they're from Vancouver?

Simon: No, they're from somewhere in the states. But they play, you know, really edgy sort of classical style rock for the modern age. I don't know, for the 2000, yeah.

Michael: I'm reading this book now about the so called Cam-Rock Renaissance, during the period 1985 to 1995. Bands like DOA of course, we've already mentioned, also from Vancouver, Skinny Puppy, would probably.

Michael: Yep, and The Tragically Hip.

Michael: Overplayed! Tragically Hip is probably the most popular group in Canada, though.

Simon: Yeah, I lived with a techno DJ in university, so we often had parties at our house and he would play his new stuff that he was very proud of, you know, acid jazz, hip-hop beats, and all kind of weird stuff, but good, and he had a rule because people kept on coming up to him and saying, "Can you play 'The Hip' man?" and he always said, "They'll be no 'Hip' played at this house!"

Michael: That sounds like something I did when I was DJing in bar. Everyone would ask me to play Guns n' Roses and I absolutely despised them. I even went to the extent of buying one of the waitresses their album so that she would never request them again, but unfortunately I didn't have enough money to buy everyone the album and I found myself playing them sometimes two or three times, and the same song two or three times. It wasn't my place. I couldn't make the rule your friend made.

Simon: Well, let's wrap up that, this conversation.

Someone who is 'Francophone' speaks French. Notice the following:

That's a common mistake that other Canadians make.

A 'common mistake' is an error that many people make. Notice the following:

I went to the University of Windsor for my undergraduate degree.

You 'undergraduate degree' is the first degree that you get in university.  Each program usually takes four or five years. Notice the following:

In this case 'resonate' is used to mean something like echo or be heard. Basically the statement is saying that most people don't listen to new music in Japan. Notice the following:

Once you become middle-aged, you start listening to a lot of stuff that you listened to when you were in high school.

You are considered to be 'middle-aged' when you are between 45 and 65 years old. Notice the following: