Christine talks about how global warming is affecting her island. 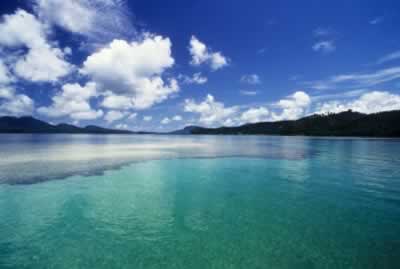 Christine: Yes, we're a small island in the South Pacific.

Todd: And that is near Australia?

Christine: To Brisbane it's 3 hours by plane. To the tip of Australia it's about an hour and a half by boat.

Todd: We were talking earlier about global warming and how this can be a problem for your island.

Christine: Oh, absolutely, because we're surrounded by water, obviously it creates a problem when the tides rise.

Todd: Because the tides rise, and the water...

Christine: The tides rise, and a lot of people build their homes and villages around the water....cause the ocean is where we get our food from, most of our costal villages are based there, so, yeah!

Todd: The people put their houses close to the water.

Christine: Close to the water or on the water

Christine: Like we were talking about it earlier, I am very much for the Kyoto Protocol I think that industrial countries, industrialized countries need to act now before there's too much, how do you say?, before even more damage is done. Obviously being from a small country where people aren't educated about these things we don't realize what is really happening, but we are really starting to realize now and we and other small nations have spoken out about it and it's good to know that bigger countries are doing something about it, and I think thing needs to be done now, rather than waiting, which is happening with governments which are under economical stress right now...they haven't done enough..they know the situation, they know they're responsible for it. We're the ones who are suffering because of it even though we don't add to it. Yeah, so I think they should do something.

In this case 'just above' means a short distance north of Australia.  We use the word 'just' to show a small distance or period of time and 'above' indicates an upward or northern direction. Notice the following:

Papua New Guinea to Australia takes about an hour and a half by boat.

You can use 'about' before a measurement of time, distance or number to show the information being given is approximate.  Maybe it takes little more than an hour or maybe a little less. Notice the following:

Most of our coastal villages are based there.

In this case, 'based' is similar in meaning to 'located.' Notice the following:

What do you think about global warming?

'Global warming' is the idea that the overall temperature on the planet is increasing every year because of pollution and negative effects that humans have on the earth. Notice the following:

We need to something about it rather than wait.

We use 'rather than' to compare two options and show which one we prefer.  The option that is not preferred always comes immediately after 'rather than.' Notice the following:

just • about • based
warming • rather than