Richard talks about his dog. 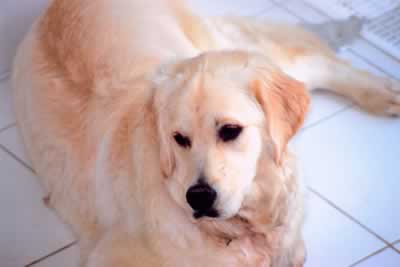 Todd: Good to see you.

Todd: Yeah, it's been awhile.

Richard: It's been awhile.

Todd: Richard, you helped me out when I first started the website.

Todd: Yeah, you're very kind and you talked about your dog!

Richard: Lucky! Here he is! This is Lucky's picture.

Todd: Wow! That's big. So tell us about Lucky. How's lucky been the last two years?

Richard: Lucky, the last two year! Yeah! Lucky is almost two years old. His birthday is November the 11th! One-One-One-One, so he'll be 2 years old. He's doing well. He's developed some unique, sort of characteristics, personality traits. One is that late at night he doesn't like walking just with me, it has to be with me and my wife together. So he has two big bodyguards. It's true. It's an unusual thing but he will not walk by the river where it's very dark with just one person. He needs two people to walk him. Which is unusual for a dog. He's a golden retriever so he's a big dog, but he's just, he needs two people and he gets very lonely, you know he likes to follow people around the house the whole time, you know he's a really, he's a very sort of sociable dog.

Todd: What a lovely dog?

Todd: I want to meet him!

Todd: So, I think you were saying something earlier about how he gets cold.

Richard: Yeah, that's the other thing. One of the other unique things about Lucky is that I think he's a but spoiled. I mean, you know, a lot of dogs live outdoors but this dog lives indoors, and you know the kotatsu, in the winter my obaachan, my wife's mother has the kotatsu.

Richard: An electric heater underneath it

Richard: And cat in Japan, cats are famous for going under the kotatsu in winter but my dog goes under the Kotatsu, so and he's quite big right, so you just see his legs poking out of the kotatsu. I mean that's a very unusual behavior for a golden retriever. Yeah, yeah, he's and unusual dog.

Todd: So how much does he eat?

Todd: Well, no but like, first I'm just curious, how much does you dog eat?

Richard: How much does he eat? Well, it's three times a day.

Todd: Yeah, I mean, how much does it cost?

Todd: Yeah, to feed a dog in Japan!

Richard: And then Vet's bills are pretty high.

Todd: Wow! But he's worth it! It seems like you love your dog.

Richard: I love my dog. I carry his picture everywhere.

Todd: That's my favorite dog too! Golden Retrievers. They're so kind.

Richard: I also love my son! Can I talk about my son!

Todd: OK, we'll do your son in the next interview.

It's been a while since I last saw you.

You can use the phrase 'a while' to mean a long amount of time. Notice the following:

One of the other unique things about Lucky is that I think he's spoiled.

If a pet or a child is 'spoiled' it means that he gets everything that he wants. Notice the following:

In Japan, cats are famous for going under the kotatsu in winter.

If cats are 'famous for' something it means that it is their usually action and many people are aware of it. Notice the following:

That's a very unusual behavior for a golden retriever.

Something that is 'usual behavior' is not a normal action, it is something that doesn't happen every day. Notice the following:

How long something 'lasts' is how long you can keep it or use it. We can also use 'last' when talking about humans to mean 'survive. Notice the following:

spoiled • a while • famous for
behavior • lasted