Eli talks about her boyfriend. 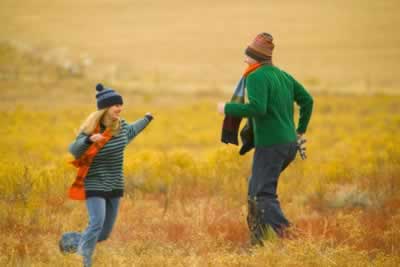 Eli: I'm missing home a lot actually, at the moment. I wasn't when I first arrived, because of all the excitement about being here, and everything, but since actually about a month and a half ago, my boyfriend came here for three weeks, three and a half weeks, and we went traveling around the rest of Japan, which I think is very important, if you're here, you got to do it and he was the perfect person to do it and we had loads and loads of fun, and since he's left, yeah, I've started to think about home a bit more, now living here is kind of just normal way of life and after the big excitement of having him here, you know traveling around everywhere, it's, I'm starting to think about him, my family, my friends and just you know when I ring him up they're all doing stuff that we used to do together, and it sort of makes you think about what it would be like to get home. I think I'm quite looking forward to going home now.

Todd: OK, could you, this is very interesting. Could you describe your boyfriend? Like what kind of person is he? How did you meet?

Eli: We actually met in a club which he runs. He has two jobs. He runs a club in Bristol and he edits magazines for recycling in Bristol and Wales and writes articles about environmental recycling issues. Actually when he came to Japan, he managed to interview a few people here about it, and Japanese recycling isn't as strict as you think it is, um, yeah, but we met in his club and he is a friend of my brothers and we knew a lot of the same people, but it's cheesy to say but almost it was love at first site. I t took about half a year for us to get together, but we were sort of good friends before that and we've been together for two and a half years now. (That's a long time.) It's not really though. It's just zoomed by so quickly. Yeah, we live together now in England and sort of very happy. We never, we're one of these couples that never argue. We obviously have disagreements but there's never any sort of shouting involved. We like a lot of the same things. We like lots of different things as well. I think it's very important. You can't only be into the same things. I'm slowly turning his mind towards anime and computer games. I'm twisting, twisting him, but I do have to make it clear when any Final Fantasy games are out, that I have two boyfriends and he is only one of them.

Todd: Wow. He sounds like a really interesting guy.

I'm missing home a lot at the moment.

'At the moment' is another way to say 'right now.' Notice the following:

Living here is kind of just a normal way of life.

Your 'way of life' is a how you live.  It is your daily schedule, where you live, what you eat, your transportation and everything else.  Notice the following:

What kind of person is he?

When you ask 'what kind' you are looking for a description of something.  In this case it is a personal description. Notice the following:

My boyfriend runs a club in Bristol

If you 'run' something you are in charge of organizing and managing employees. Notice the following:

When my boyfriend came to Japan, he managed to interview a few people here.

If you 'manage to do something' you accomplish doing it even though it is difficult. Notice the following: