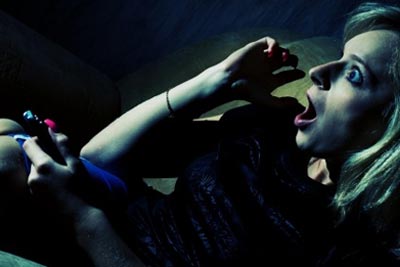 Ruth: So Akane, is there anything that you’re frightened of?

Ruth: Horror movies wow. Have your ever seen a horror movie?

Akane: Well, um, when I was little I used to watch them with my friends, because, back in the 80’s, horror movies used to be really popular. Like ah “Jason”, and “Freddy Cruger”. (Oh yeah) and things like that yeah. But ah, they used to keep me up at night and I couldn’t sleep.

Ruth: Yeah, my friend actually had a “Freddy Cruger” poster. It used to frighten me.

Ruth: Yeah, it wasn’t my favorite. So, ah, what don’t you like about horror movies?

Akane: Well, um, I think, I think uh, I don’t know, I think it’s the psychological aspect of it. They just really make me feel scared.

Ruth: Ah, heh.. What was the last horror movie that you watched?

Akane: Um, the last one I watched was, I think it was the “Blair Witch Project”.

Ruth: Oh I know that film, yeah
.
Akane: The first one, I saw it in the theatre with my friend. And I couldn’t sleep properly for a week after that.

Akane: Ya, I mean, I know it’s stupid. A lot of people think it’s a pretty stupid movie. Um, but I think it was just, just the psychological aspect of it that really made me feel scared. And uh, I think, with that movie, after people saw it, they weren’t really sure whether it was real or not.

Akane: And so there was that element as, as well.

Ruth: Was that the same film that I’m thinking of. The one where they filmed people in a forest, is that right?

Akane: Yeah, that’s right. It was in a forest. And the whole thing was done with a camcorder. A hand held camcorder. And so, it was, a lot of it was, I think, black and white. I can’t remember. And uh, and the camera was very shaky, and…

Ruth: So it wasn’t professionally filmed?

Akane: Um, I guess it didn’t look like it was.

I'm really scared of horror movies, so I never watch them.


'Horror movies' are scary movies that usually include a lot of blood and killing. Notice the following:

keep me up at night

Those horror movies used to keep me up at night and I couldn't sleep.

A lot of people think it's a pretty stupid movie, but it really made me feel scared.


A 'stupid movie' is one that is dumb and maybe doesn't make any sense. Notice the following:

The whole thing was done with a hand-held camcorder, and a lot of it was in black and white.


'Camcorder' is another way to say 'video camera.' Notice the following:

made a lot of money


Something or someone that 'makes a lot of money' generates income.  Used like this, it means that many people paid to see the movie, so the producer got a lot of money for making the film. Notice the following: