How to Make Spaghetti 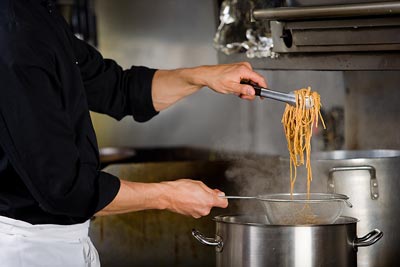 Hello, and welcome to our show.
Today, we’ll be making one of my favourite recipes.

First, what you will need for this recipe is:

First, let your water come to a boil, and boil your dried spaghetti.

While you are waiting for your spaghetti to boil, you can prepare your sauce.

Heat up the pan with the olive oil, and add the minced meat.
Brown the minced meat until it gets nice and brown.
Lower the heat to about medium heat, and then add your chopped onions.

It’s important to fry your onions in lower heat so that you can let it caramelize. It’ll take a while but it will be worth the effort, because all of the sugars will come out of the onion and bring a nice sweat taste to your sauce.

Then, add your mushrooms (your chopped mushrooms), and keep stirring it around until it gets nice and tender.

And then lastly, you can add your tomato sauce, or peeled crushed tomatoes.

And let it simmer for a bit until it gets nice and warm.

Your spaghetti should be ready by now. So you can drain the water out and add a bit of olive oil to your spaghetti, so that it won’t stick. Put your spaghetti on a plate, and then pour some of your sauce on top.

Now, you can fry your egg on a pan sunny-side-up. I like to leave the yolk nice and soft. And then put the fried egg on top of your spaghetti. Now, when you eat your spaghetti, I like to pierce the egg with a fork so that all the yolk drizzles out and becomes a part of the sauce. The egg is quite alkaline, so it brings a nice mild taste that counteracts with the acidic tomato.

You'll need fifty grams of minced meat and one egg.


When something is 'minced,' it is chopped into very small pieces. Notice the following:

Brown the minced meat until it gets nice and brown.


Here 'brown' is used as a verb, meaning to cook the meat until it turns brown, showing that it is cooked. Notice the following:

It's important to fry your onions in low heat so that you can let it caramelize.


When something that you cook 'caramelizes' it means that you cover it with melted sugar. In this case, it means more to cook them until they become clear. Notice the following:

Let it simmer for a bit until it gets nice and warm.

When something 'simmers,' it cooks at a lower temperature than boiling, but there are still a few bubbles.  You usually simmer sauces on low heat. Notice the following:

I like to pierce the egg with a fork so that all the yolk drizzles out and becomes part of the sauce.


When a liquid 'drizzles out' of something it comes out slowly, rather than all at the same time. Notice the following:

The egg is quite alkaline, so its taste counteracts with the acidic tomato.


An 'alkaline' material contains alkali, which are used in chemistry to neutralize acids. Something 'acidic' has acids, so it has a sharp and strong flavor. Notice the following: