Ruth talks about a gift she has to buy. 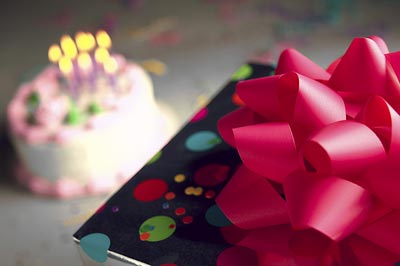 Todd: So, Ruthie, what did you do today?

Ruth: Well, I got up quite early this morning, actually, to go shopping.

Todd: That's true but you're on a budget. You're trying to save money.

Todd: So, what did you get your brother for his birthday?

Ruth: Well, it was quite difficult to find something that I thought he would like, but I got him some cakes in the end, some Japanese cakes.

Ruth: Yeah, they're in like a special presentation box.

Todd: So, how are you going to get the cakes to your brother? Just through the post office?

Ruth: Yes, I sent them in the post this morning.

Todd: Oh, did you send them express or just regular mail?

Ruth: No, regular mail because it was cheaper.

Todd: But, don't you want it to hurry and get there for his birthday?

Ruth: I've got one week. I think it will get there in time.

Todd: So, what do you think you're brother will think of the cakes?

Ruth: Well, he likes chocolate cake, and they look like they've got kind of chocolate inside but it's bean paste. I think he'll be disappointed.

Todd: So what did you brother get you for your last birthday?

Ruth: That's a good question. He always gives me money, and he often gives me chocolate as well. He's very generous.

Todd: Actually, I'm the same way. Guys like to give money. Money is so easy. No shopping involved.

Ruth: It's practical, though, it's good.

Todd: Now, I've been told that when you give money for a gift, it's actually very impolite.

Todd: Is that true? Yeah!

Ruth: Why is that?

Todd: I don't know. Some people say it's just really impersonal. That you should take the time to get a gift.

Ruth: Really! I really think if anybody gave me money I would be so pleased. It's a good present.

Todd: Exactly, that's what I think. (Pause) Hey, um, actually, when are you going to see your brother next?

Ruth: Probably, I will see him in August of September.

Todd: Oh, that's quite a ways away.

Ruth: Yes, about four months is that.

Todd: So is this a younger brother or older brother?

Todd: Ok, well, if you happen to e-mail him, tell him happy birthday.

Ruth: Oh, certainly will do. Thanks.

You like shopping, that's true, but you're on a budget.


You can say that you are 'shopping on a budget' when you have a limited amount of money that you can spend. Notice the following:

in a week or so

Well, it is my brother's birthday in a week or so.


You can use the phrase 'in a... or so' to give an estimate of a time frame. In this case, it could be a little more or a little less than a week. Notice the following:

Did you send the package express or just regular mail?


'Regular mail' is the normal mail service that a country provides. You would use 'express mail' if you needed to send something more quickly. Notice the following:

The cakes look like they've got kind of chocolate inside but it's bean paste.


A 'bean paste' can be made by mashing up beans into a sticky substance. Notice the following:

Some people say that when you give money for a gift, it's actually very impolite or impersonal.


Someone is 'impolite' to you if she doesn't act towards you with normal social graces or is rude. You would say that someone is 'impersonal' if she lacks human emotion or warmth in normal interaction. Notice the following:

quite a ways away

August or September is quite a ways away.


If something is 'quite a ways away,' it is a long distance away from a particular place. Notice the following: