Todd and Akane make plans to see a movie. 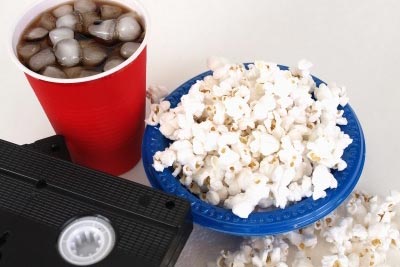 Todd: Hey, Akane, I was thinking, why don't we get everyone together tonight and rent a movie.

Todd: So, I'll run down to the video store. I was thinking, because Star Wars is coming out, why don't we get the previous Star Wars, Episode II, and watch that.

Todd: What! Come on it's Star Wars.

Akane: Well, I watched Episode II before and I really didn't like it.

Todd: Oh, I thought it was great. I mean I know the critics were really rough, but it had great action, cool characters.

Akane: Well, actually, I thought it was very commercial.

Akane: Yeah, and the whole thing was really mushy, and there were also some annoying characters.

Todd: Yeah, well, maybe, but, I just like all Star Wars, it doesn't matter, it doesn't have to be perfect. As long as there's storm troopers, and light sabers, I'm happy.

Akane: OK, so you're a big Star Wars fan.

Todd: Huge. But that's OK. I'll get that movie another time. Um, how about you suggest a movie. What would you like to see?

Todd: I can't stand her.

Akane: What! What's wrong with her?

Todd: She's terrible. Every movie she has the perfect life, and she has, she looks so cute, but she can't find love. It's like, come on, people like that have a perfect job and look cute and beautiful like Meg Ryan do not have trouble finding love.

Akane: But she's so cute and funny to watch. I just really enjoy watching her.

Todd: I don't know. I just can't do it. You know though, I liked Meg Ryan in that movie she's made about, she went to the Gulf War, or whatever, and she was a helicopter pilot.

Akane: Oh, yeah, yeah! I remember that one. I forget what it was called though.

Todd: Yeah, yeah, she was OK in that but she wasn't that cutesy romance.

Akane: That's true. She was a different character than usual.

Akane: Ah, I don't know. What about a comedy that will make us really laugh.

Akane: Ah, no, I haven't actually.

Akane: Great! We'll get that.

I'll run down to the video store to rent a movie.


'Run down' is a casual and friendly way to say 'go down.' Notice the following:

I know the critics were really rough, but it had great action and cool characters.


A 'critic' is a person whose job it is to review new movies, books, CDs, etc. If a critic is really rough about a review, it means that the words he used were strong and the review was not a good one. Notice the following:

Well, actually, I thought it was very commercial.


When a movie or album is considered 'commercial,' it is made with the idea of selling a lot of copies and making money. Notice the following:

But the whole thing was really mushy, and there were also some annoying characters.


Something that is 'mushy' is overly romantic or sentimental. Notice the following:

Yes, you could say I'm a huge fan of Star Wars.


If you really like something, you can say you are a 'huge fan.' Notice the following:

Meg Ryan was okay in that but she wasn't that cutesy romance.


A movie or book that is a 'cutesy romance' doesn't have very intense content and is made mostly to make women smile. Notice the following: