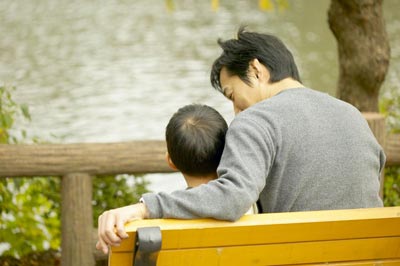 Todd: Now Steven, I'm single and, but you are married and you are a father, correct?

Steven: That is correct, yeah.

Todd: OK. I'm just curious. What is it like being a father?

Steven: Ah, right. OK, well, I think if I first of all talk about what it was like not being a father, being me and not being a father. I think I used to make the most of my free time, well in fact I didn't make the most of my free time. I was a very lazy person. I was an incredible time waster, so I would have all of this free time to make use of and I would probably just sit in front of the TV, or I'd probably go to a pub and drink, but anyway I took my time for granted. I thought I have this time. It wasn't such a precious thing for me. I had so much of it.
Once I became a father, suddenly my time disappeared but strangely enough, now that I've become a father and I've, it's taught me to appreciate the time I have. My time is now very limited. My work has become busier but I actually make much more use of my time now than when I did so much of it. It's kind of strange.

Todd: And how many children do you have?

Steven: Yep, they're both still very young. They keep us very busy. The eldest is four and the youngest is three.

Steven: So they need, they still need quite a lot of attention.

Todd: Yeah, so when you first have kids do you lose a lot of sleep? I'm always worried that I won't be able to sleep.

Steven: Well, something that carried over from my previous lifestyle was an ability to sleep very well, and, um, fortunately I have a very understanding wife so if the children woke up, yeah, well because I had to work my wife was, my wife tended to be responsible. She would look after the children if they woke up during the evening, during the night, sorry, and I'm such a good sleeper that even if they were crying incredibly loudly I could just go back to sleep. I don't think there are many fathers like me. I've spoken to some other fathers and they don't have the same talent as I do.

I'm just curious: What is it like being a father?


When you have questions about things, or you just want more information to ease your mind, you can say that you are 'curious.' Notice the following:

I was an incredible time waster, and I took my time for granted.


A 'time waster' is a person who wastes time or doesn't use the time that he has in the way that he should. Notice the following:

lose (a lot of) sleep

When you first have kids, do you lose a lot of sleep?


If you 'lose sleep,' it means that you don't get all the sleep that you need and you are tired. Notice the following:

Something that carried over from my previous lifestyle was an ability to sleep very well.


When something 'carries over' from one situation to another, it means that it continues. Notice the following:

I'm such a good sleeper that even if they were crying, I could just go back to sleep.


A 'good sleeper' is someone who can sleep very easily and well. Notice the following: