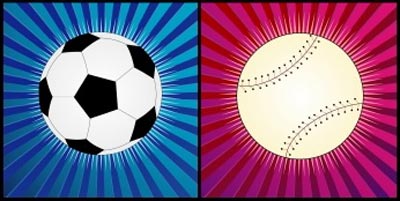 Todd: So, Steven, I thought we would have a friendly debate. What do you think is the best sport in the world?

Steve: Really, I'm quite surprised to hear you say that because you did mention, I believe the question was "the best sport in the world" (Yes) whereas baseball isn't as nearly as widely appreciated worldwide as football is.

Todd: Ah, that's true. That's true. I will give you that, but a lot of countries do play baseball, it's popular in Asia (they do indeed, yeah) and Central America, and in North America, and it's a young sport. You just got to give it time. We need more time to come around.

Steve: Yeah, I don't have anything in particular against kids playing baseball. I think getting kids out playing any sport is very healthy and it very good thing to happen, but I got to say, I mean for young kids, particularly in developing countries where they perhaps need a lot more equipment to play baseball, I think soccer is much more accessible than baseball. They only need a ball, a field, a street even before they can get started.

Todd: Well, that's kind of true, but I mean in baseball you just need a stick and a rock.

Todd: But I mean, one thing that I think how baseball is better than football is that in baseball it's more democratic in that everybody has to bat. You can't have a prima donna star. I mean you can have stars, but everyone's gotta swing the bat, and you know, in soccer if you're a fullback, if I'm using that correctly, you play back by the goal, you know, you're kind of just lagging back there. You're not gonna score or anything.

Steve: Yeah, that's very, very true and I think you're very right in saying that baseball is indeed a democratic sport, but I think soccer gives each individual player to play to his own strengths, his own physical capabilities, for example you have people who are naturally strong presence who are more suited to, well, playing defense, whereas your speedier players, and your slightly more cunning players lends itself to being a striker, so it really allows people to specialize and the crowd really get behind that. The crowd really appreciate a good strong defender and a nifty striker who gets in there and poaches a lot of goals for his team.

Steve: But I mean, to be honest with you, baseball, that's not really doing anything that cricket never did, for example. All those skills were employed in a sport that was invented way, way much longer ago than baseball ever was.

Todd: That is true. You got me on that one, so anyway. well, I like football, but I just, I have to stick with baseball.

Steve: That's fine. I think we can agree to disagree.

Let's have a friendly debate: What do you think is the best sport in the world?


When you have a 'friendly debate,' you have an informal discussion about two opposing ideas. Notice the following:

young sport or give it time or come around

Baseball is a young sport, so you got to give it time to come around.


Here, a 'young sport' refers to the fact that baseball was invented more recently than some other sports. When you 'give something time,' it means that you patiently wait for an action or a change. If something 'comes around,' it changes in its position or opinion. In this case, you are waiting for baseball to become popular. Notice the following:

don't have anything against

I don't have anything against kids playing baseball, because I think it's a good sport.


When you 'don't have anything against' a particular action or idea, it means that you see nothing wrong with it.  It is okay in your mind. Notice the following:

Baseball is more democratic in that everybody has to bat and you can't have a prima donna star.


Here, 'democratic' refers to activity in which everyone participates equally. Many sports have a 'prima donna' star, who is the best or most respected player on the team. Notice the following:

If you're kind of just lagging back there, you're not going to score or anything.


When you are 'lagging' behind, you are moving more slowly than the rest of the group or than you should. Notice the following:

Your slight more cunning players lends itself to being a striker.


A person who is 'cunning' is very capable in performing some specific tasks and capable of deceiving the other team. Notice the following:

The crowd really appreciates a nifty striker who poaches a lot of goals for his team.