Steve talks about his time in Wales. 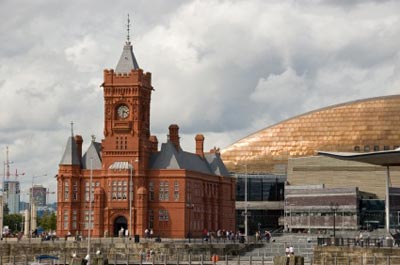 Todd: So, Steven, where did you go to college?

Steve: I went to the University of Wales, um, the College of Cardiff there, so it the United Kingdom, obviously we have England, Wales, Scotland, and Ireland and so I spent three years over in Wales.

Todd: Wow. Sounds fun. So what's university like in Wales? Is it different than University life in Britain?

Steve: Yeah, it is. Um, for example Wales has it's own distinguished, distinctive language and culture as well, so if you go to Wales you'll see street signs written not only in English, but above that you'll have the Welsh language there and Welsh people are very, very proud of their language, and their heritage and there culture and it made it just a slightly different experience from studying over the border in England.

Todd: So they speak Welsh? Is that the language?

Steve: That's correct. Yeah. Yeah, they do. It's not spoken by everybody in Wales. Since the middle ages, the usage of the language has declined somewhat but there has been a revival over the last 30 or 40 years, and now about, maybe about 40% of the Welsh population speak it as either as their first of second language.

Todd: Did you learn it while you there?

Steve: No, no, I didn't, no. Everybody speaks English there. but there is a lot of good music coming out in Welsh now. There's lots of cultural festivals and when I was at Cardiff, there's lots of pubs where it's Welsh speaking only and it was quite good fun to go in there and try to order a beer and stuff in the Welch language, but that was about as far as I got.

Todd: Could you say that there's any, it's a stereo type, that's there's any difference between the Welsh people and the British people?

Steve: There is yeah, because they've had a different history and obviously that affects how people have evolved over many centuries. They like different sports for example. They're more into rugby than they are into football. They tend to look slightly different than they do to English people. They tend to have sort of redder hair and darker eyes than English people, but also they're very, very loyal, they're very, very fierce, they're very passionate people. They're very nice people.

Todd: Well, it sounds like a nice place to go. I'd love to go someday.

Steve: Yeah it was nice!

Wales has its own distinctive language and culture as well.


When something is 'distinctive,' it means that it is different and distinguishable from other similar things. Notice the following:

Welsh people are very, very proud of their language, heritage and culture.


Your 'heritage' is something that relates to your ancestors and your cultural traditions. It is like the cultural history of your family and where it comes from. Notice the following:

Since the Middle Ages, the usage of the language has declined, but there has been a revival over the last 30-40 years.


The 'usage' of something refers to how or how frequently it is used. If there is a 'revival' of usage, it means that some action recovers from a period where it is not used much and begins to be used again like it was in the past. Notice the following:

They've had a different history, and that obviously affects how people have evolved over many centuries.


When something 'evolves,' it changes over a long period of time, usually depending what it needs to survive. Notice the following:


A 'fierce' person would be someone who is intensely aggressive, violent or hostile. When you are 'passionate' about something, you are very excited and emotional about it. Notice the following: