Marion talks about the Cliffs of Moher in Ireland. 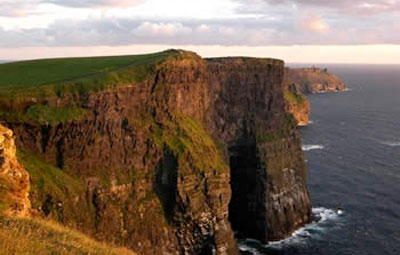 Todd: So, Marion, for people that go to Ireland, what's one place they really should visit?

Marion: Well, one of my favorite spots is called the Cliffs of Moher.

Todd: The Cliffs of Moher.

Marion: Yeah, and that's on the West Coast. It's quite near Galway, so it's a little bit to the south of Galway, I think.

Todd: OK, so it's near Galway.

Marion: That's a city on the West Coast of Ireland.

Todd: What is this place, the Cliffs of Moher?

Marion: The Cliffs of Moher are, as far as I know, are the tallest cliffs in Europe.

Todd: Wow. That's pretty cool. (Yeah) So when you go to these cliffs, what can you do? Can you climb down them, or?

Marion: No, you can't. (What) I think if you tried, you might end up in the water and you may never get up again.

Marion: Yeah, it's quite scary. When I went there for the first time, I was quite young, and I went with my mother and brother and uncle, and I remember my mother was holding my hand, and my brother, who was younger than me, was of course more brave than I was, so he was going right up the edge, and looking over and leaning out and I was really, really scared because at that time, there was no barrier to keep you from falling in, so yeah, really, really scary.

Todd: I bet. So when you go to the Cliffs of Moher is it really windy, does it rain a lot?

Marion: Yeah, it's quite windy because you're right on the edge of Europe, basically you're facing the Atlantic ocean, which can get quite turbulent, there so you can see the waves crashing up against the cliffs. That's if you lean over of course. There's a flat area of rock where many tourists kind of lie on their stomachs and inch their way up to the edge and then they look over, but I was too scared when I went. I couldn't do it. I thought for sure I'd fall over and die.

Todd: So assuming that someone goes to Ireland and they go to Dublin, they fly into Dublin, how will they get to the Cliffs of Moher?

Marion: Um, pretty easily. Actually, from Dublin you have the choice of going either by train, directly across to Galway, then from Galway, you would need to take a bus, so you could go from Dublin to Galway by bus as well, but the train is probably more comfortable and then it would be a shortish bus ride to the Cliffs of Moher, but obviously in Ireland, you're best bet is really to hire a car if you can.

Todd: OK. Well, sounds like a good place to go. Thanks Marion.

I'm quite sure that we have that distinction.

If you have a 'distinction,' then you have a unique or distinguishable trait or characteristic.  Notice the following:

He was going right up the edge, and looking over and leaning out.

To 'lean out' is to stand in a way that is not exactly vertical, but tilted to one side or the other.  In the example, the man is tilted forward to see something below him.  Notice the following:

You're facing the Atlantic ocean, which can get quite turbulent.

If you are talking about a 'turbulent' ocean, this is an ocean that is not calm and is full of waves, like in a storm.  Notice the following:

You can see the waves crashing up against the cliffs.

If waves 'crash up against something,' they hit it with full force, making a loud sound.  Notice the following:

The train is probably more comfortable and then it would be a shortish bus ride to the Cliffs of Moher.

If something is 'shortish,' it a little bit longer than short.  This is from the perspective of the speaker, so it probably different for each person.  There is no real definition about when something becomes medium length instead of shortish.  Notice the following: