Terry talks about his routine when he's not riding. (Part 4) 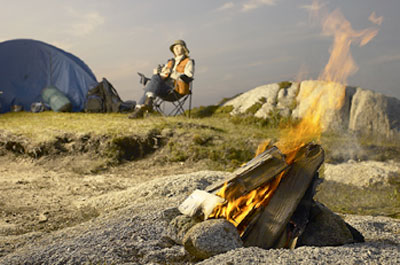 Todd: So, now Terry when you finish your bicycle ride at the end of the day, you go to a campground, so what do you do, I mean, you set up camp, I mean, and how to you take a shower, or brush your teeth, or?

Terry: Oh, in this, as an example on this trip, I was staying mostly in state park in Washington, Oregon, and California. Almost all of the state parks that I stayed in had showers, so of course they have restrooms and all your basic facilities, as far as that goes, and as far as what I did, what we do in camp, or what I do in camp is, I usually pick up a newspaper during the day and I usually carry a novel with me so, part of what I do in the afternoon is just to relax and read the paper, or read a book, and then also in the afternoon, I work on my bike if I need to, just try and get ready for the next day, or unwind from that day.

Todd: Ah, what time do you normally make dinner?

Terry: Ah, it just depends on, usually 5 o'clock, 6 o'clock, something like that. I, when I'm on the road I tend to be the proverbial "early to bed, early to rise."

Todd: Sure. Like what things do you cook? Cause you probably don't want to carry a lot of food. Like what would be a typical meal that you would have?

Terry: Um, you're absolutely right. You don't really want to carry a lot of access food because you're carrying a lot of weight anyway's. My, when I'm on the road, my bike probably weighs 45 kilos, so it's, that's a fair amount of weight to push up over a mountain range. Um, cook pasta for dinner, so some soup or something fairly simple. In groups you tend to buy more elaborate food, buy salad material and what not.

Todd: Now, what do you actually prefer, doing the bicycle trip alone, or in a group?

Terry: Well, they both have their good points. I think the main thing was just that, it just depends if you're interested in doing a trip when a trip is available. In this case, there was a trip that was available, going down the West Coast but it was in the month of September and I had to return to Japan and so, the timing just didn't work out out for me, and then I think lately, doing these trips solo has, is working out for me because I'm not training for the trips. Typically when you're going with a group, you have to be in shape when the trip starts so that you can keep up with the group, so this, this is working out for me, to do solo trips

Todd: Oh, so you prefer the solo?

Terry: Well, it kind of depends.

Todd: OK. Well, thanks a lot. Thanks a lot for talking about your trips.

Terry: Thanks I enjoyed it a lot.

I work on my bike if I need to, just try and get ready for the next day, or unwind from that day.

To 'unwind' is to relax and de-stress.  Notice the following:

When I'm on the road I tend to be the proverbial "early to bed, early to rise".

'Proverbial' refers to something that has been expressed in a proverb or refers to a proverb.  A proverb is a common saying expressing wisdom or advice.  Notice the following:

In groups you tend to buy more elaborate food.

Something 'elaborate' has a lot of details.  In this case, elaborate food has many ingredients and takes time to make.  Notice the following:

When you're going with a group, you have to be in shape when the trip starts.

If you have a strong, healthy body and can do athletic activities for long periods of time then you 'are in shape.'  Notice the following:

So that you can keep up with the group.

To 'keep up with someone' is to go the same speed as him.  Notice the following: