Terry talks about taking care of his bike. (Part 2) 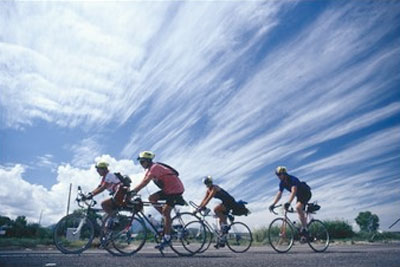 Todd: OK so, here we go, now Terry you were saying that you went from Vancouver to San Diego. How many days did that take?

Todd: That is so cool. So first you have your bike in your hometown and you put your bike on the bus and you took the bus to Vancouver?

Terry: Right. Yeah, you have to put your bike in a bicycle box as it's know. It requires a little disassembling of the bicycle but, it's not difficult.

Todd: As, so you take the bike apart and put it in a box and then put it,

Terry: Yeah for sure it on a bus or an airplane, they're both the same, you have to put it in a bike box.

Todd: So are you really good at bicycle maintenance?

Terry: Ah, no. I would say that that is one of my shortcomings. I certainly do some bicycle maintenance. Whenever you're on a long bicycle trip, you by design, you have to take care of your bike and then that's your transportation. You're carrying everything you have with you so you need to take care of your bicycle. YOu can stop in bicycle shops along the way and have then do any major repairs, but on a day to day basis you need to maintain your bicycle.

Todd: OK, so when you are taking a trip, what tools do you need to take with you? To take care of your bicycle?

Terry: Oh, just some basic Alan wrenches and screwdrivers and, oh and obviously, a repair kit for patching a tube, or some extra inter tubes. I usually just take along extra inter tubes, and you need tools to take your wheel, your tire off, and things like that.

Todd: Wow, so you just take the tubes with you, huh? How many inter tubes do you take?

Terry: Oh, I usually take two or three extras. I'm, anymore, I'm not real keen on patching flats. I usually just take the tube out and throw it away and put in a new one.

Todd: So on your last bike trip, did you have any problems with your bike? Did it break down at all?

It requires a little disassembling of the bicycle but it's not difficult.

If you 'disassemble,' something you take it apart or separate it into pieces.  Notice the following:

I would say that that is one of my shortcomings.

A 'shortcoming' is an imperfection or weak point.  In the case of the example, a weak point in personality.  Notice the following:

A repair kit for patching a tube.

To 'patch' something is to fix a hole using extra material.  In the example, you fix a tire by gluing another piece of rubber over the hole.  Notice the following:

You need tools to take your wheel, your tire off, and things like that.

A 'tire' is the rubber part of the wheel that holds the air.  Notice the following:

I'm not keen on patching flats.

A 'flat' is a deflated tire or a tire without air.  You get a flat if you ride over a something sharp, like a piece of glass.  Notice the following: