Terry talks about his daily routine on the road. (Part 3) 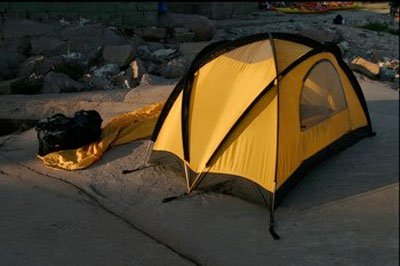 Todd: OK, Terry, now when you take your bike trips, when you bicycle across America or down the West Coast, what is a typical day? Like how would you start your day and how would you finish your day on the bicycle?

Terry: Well, a typical day, I'm camping usually, so I usually get up at or near sunrise, sometimes I get up slightly before sunrise, and I have to pack up all of my camping gear, stuff the sleeping bag in a stuffed sack, roll up my air mattress, pack up the tent, and then eat breakfast and then I usually try and, you know, do the daily essentials and then hit the road. I usually try to be on the road on the road sometime around 7, 7:30 in the morning, depending on when the sun comes up. But I like to go cycling early in the morning because it's cooler and there's, you tend to see more wildlife and I just think it's a nicer time of day, especially if you're riding in the summer, it tends to get warmer, as the day goes on, so, and then I usually try and hit, find a campground sometime in the afternoon and then the process starts again in setting up camp, setting up a tent and whatnot. Um, during the day, I'm usually cycling, actually cycling for 5 to 6 hours a day and then taking two or three hours off, various breaks, and eating lunch and what not, and then usually in the afternoon, I stop and buy some food, that I can cook, so I can cook dinner in camp and have breakfast the next morning. Oh, that's pretty cool.

Todd: So you just pay for everything with a credit card, or you bring cash, or?

Terry: Oh, both. Especially in the Unites States, with debit cards you can get cash back when you're buying food at a grocery store or so. It's always nice to have cash to pay for incidentals and .

Todd: Well, that's interesting. You said that you see wildlife. What wildlife would you see?

Terry: Oh, on this trip, as an example: elk and deer and raccoon and possums and turtles and snakes and all kinds of wildlife.

Todd: You know, have you almost ever hit an animal?

Terry: I haven't. I don't think I've ever come close to hitting an animal, no.

Todd: Well, speaking of being hit, have you had any close calls with cars?

Terry: Um, well, that's kind of, I think goes with the territory, so to speak. I've never come close to getting hit but I certainly feel like on occasion, I've been, I've had vehicles come closer to me that I wanted them to close, and, kind of, the real bug-a-boo for cyclists is logging trucks, and back east, coal trucks, they're just, they can be really terrifying when they are going by and you're cycling down the road.

Roll up my air mattress.

An 'air mattress' is a mattress that you fill with air to sleep on if you are camping or don't have a bed.  Notice the following:

Do the daily essentials and then hit the road.

To 'hit the road' is to leave the house or begin your travels. This is an informal phrase. Notice the following:

Then the process starts again in setting up camp, setting up a tent and whatnot.

You can use the phrase 'whatnot' instead of listing all of the other things.  In the example, it is setting up the tent and anything else that needs to be set up for camping.  Notice the following:

It's always nice to have cash to pay for incidentals.

In this example, 'incidentals' refers to minor expenses, such as buying a new bar of soap or some food.  Notice the following:

goes with the territory

I think that goes with the territory, so to speak.

If something 'goes with the territory,' it is natural and unavoidable in that situation.  Notice the following:

mattress • the road • whatnot
incidentals • territory