Biking Across the U.S.

Terry talks about his bike trips across America. (Part 1) 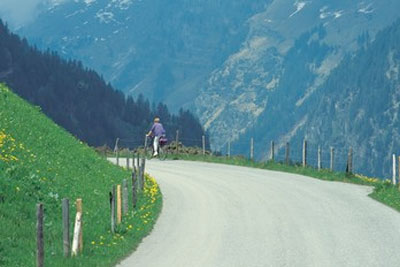 Todd: So, hello Terry, (Hello, Todd) Now Terry you do bicycle trips in America and you take long trips. Can you talk about the last bicycle trip you did?

Terry: OK, the last trip that I did in the summer, I started in Vancouver, British Colombia and rode down the West Coast to San Diego. It took about six weeks to do that.

Todd: Wow, so you started in (Vancouver) Vancouver and you went all the way down to San Diego. (Right) How far is that? How many miles?

Terry: Ah, depending on the route that you take, it's about 1800 miles, give or take.

Todd: Man, so do you train before you do this?

Terry: Actually no. For this particular trip I didn't do any training. I just started out in, once, I took the bus from Salt Lake City up to Vancouver and got to the bus station in Vancouver and put my bicycle together, put the gear on the bicycle. On the first day I rode, I only rode 25 miles and then I slowly increased the miles. So I guess it's kind of training as you go.

Todd: Man, that's, do you always go along the West Coast?

Terry: No, no, I've, originally, my first long trip was with a non-profit organization out of the United States -- Adventure Cycling, and we cycled the Trans-America trail, as it's know. It goes from Yorktown, Virginia to Astoria, Oregon. That was a three month self-contained camping trip with a group of about 13 people.

Todd: Wow, and you rode all the way from Virginia on the East Coast to Oregon on the West Coast. (Right) and how many miles was that?

Terry: But you just, it's like eating an elephant one bite at a time. One day at a time. Wow, that's cool.

Todd: All right, thanks. We'll talk more about your bicycle trip, but thanks Terri.

If you are giving a number that is not exact you can use 'give or take,' which is similar to 'more or less.'  In the example, maybe it is 1789 miles or maybe 1807, we don't know the exact number or it is not really important.  Notice the following:

Do you train before you do this?

We use the word 'train' for practice and preparation for a physical event.  Notice the following:

If you 'put something together' you assemble it.  You take all the parts and connect them.  Notice the following:

My first long trip was with a non-profit organization out of the United States - Adventure Cycling.

A 'non-profit organization' is a group that is not concerned with increasing profits of the company.  They want to make enough to pay their employees and that is all.   Notice the following:

That was a three month self-contained camping trip with a group of about 13 people.

Something 'self-contained' is completely independent and separate from everything else, self sufficient.  Notice the following: