Keiko explains why circles are so important to university students. 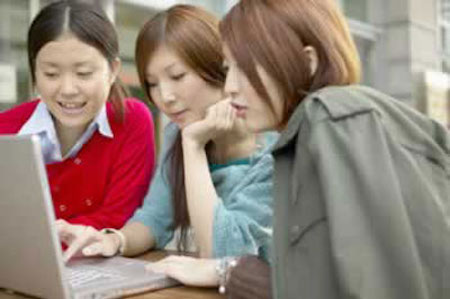 Todd: Now, Keiko, maybe you can help me. I teach at university. My students are university students and they are so devoted to their circle, their clubs. Why? Why are they so - ? To them, it's more important than class.

Keiko: Well, I think it's because, in a way they have been like a prisoner, you know, a prisoner of, you know, the cram schools. They couldn't have much social life until they get into university, and finally they have this freedom after they got into university and now is there, actually, the first and the last chance to have fun with their friends because after four years they have to start working, and before the school years and university, they have to study everyday, so I think they are trying to get the most out of their school years.

Todd: So, when you were at university, was your circle or club more important to you than your actual studies?

Keiko: No, actually, I was a bit different, cause I always heard about how Japanese students don't study hard in university, so I said to myself, OK, I won't be like that.

Keiko: But then, I did, I was one of the university organizers, university festival organizers. I was a member of that. I had done that for two years but also I tried to study as much as I could, which you know, by getting the teaching certificate from primary schools and did my thesis, my graduation thesis. It was very strange because a lot of my friends told me their graduation thesis was about 20 pages long and they just finished it in two weeks.

Keiko: And my professor didn't let us, allow us to do that so we had to spend two years on the research. We had to write at least a hundred pages so I learned quite a lot from that program and I was glad that I could balance out my university life between fun and study.

Todd: One thing that shocked me at university is that a lot of times kids sleep in class, or they read books. They don't even listen to the professor and the professor doesn't look upset.

Todd: Why? Like, how come the professor doesn't get mad?

Keiko:I think they understand what the students have come through. I mean, I think it depends on the professors. For example, my professor was quite strict but a lot of the professors don't care because they know what they've gone through. They know their situation when they came to university. "Ah, yeah, let them have fun." And if they can still pass the class as long as their in the class, they don't have to do much work and even for the exams they can just pass around the notes, and somebody who ever took the notes, studied in the last two days, and they can just pass the class, so.

Keiko: I guess that's a good way to look at it. I guess that they still have to be responsible for the work at the end.

Why are the university students so devoted to their clubs more than their class?

My students are university students and they are so devoted to their circle or their clubs.

Here, 'circle' refers to a close group of friends. Notice the following:

They have been in a way like a prisoner of the cram schools.

A 'cram school' is a private school that helps students prepare for college entrance exams. Notice the following:

I was one of the university festival organizers.

A 'organizer,' in this case, is a person who puts something in order and makes it happen. Notice the following:

A lot of my friends told me their graduation thesis was just about 20 pages long.

A 'thesis' is a long essay that is written graduate or post-graduate students. Notice the following: