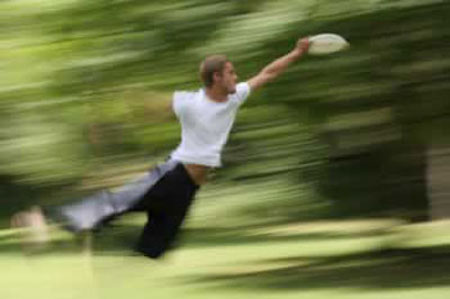 Todd: Now have you actually ever played in an organized league, like an Ultimate Frisbee league?

Wendi: Yeah, I organize leagues and I represent Canada at World’s and played against the Japanese teams and stuff like that, so.

Todd: That’s impressive. Didn’t know that about you?

Wendi: Yeah, one time only.

Wendi: One time only.

Wendi: Yeah. No, but it was really, actually, it was a meltdown tournament of us, so it was the Ultimates in Hawaii actually, maybe four years ago, and it was a really bad kind of tournament for my team, and the team I played on was Vancouver Prime, a women’s team out of Vancouver which is kind of known as the strongest, well was known as the strongest women’s team in Canada and kind of top four in North America. And the team’s done now. They’ve kind of grown into a new team in the city but Canada Ultimate is very strong, Canada and America Ultimate players, kind of more, kind of the Northwest region, very strong players, and yeah, it was really fun.

Todd: So where’s your Frisbee?

Wendi: Right there. (Pointing to the wall). That’s actually, the one on top is a Frisbee golf Frisbee, which is different from an Ultimate Frisbee. The bigger one is the one that you use when you play Ulitmate Frisbee. It’s 175 grams and the Frisbee golf disk is similar to playing ball golf. You’ve got drivers and putters and everything else and those golf disks are smaller and the rims are different so they have weights. They fly differently; you release them differently. They take different angles, all kinds of stuff, so it’s really technical and incredibly dorky. It’s great.

I organize leagues and I represent Canada at World's.

Here, 'World's' refers to the world championships or competitions. Notice the following:

I didn't know you're a world-class athlete.

Someone or something that is 'world-class' is very high quality and can compete at an international level. Notice the following:

It was actually a meltdown tournament for us.

In this example, 'meltdown' indicates that the tournament was a disaster. You say that someone or something has a meltdown when it completely self-destructs. Notice the following:

The Frisbee golf disks are smaller and the rims are different.

The 'rim' on a Frisbee disk is the edge part that folds over. It it generally used for the edge of something in the shape of a circle. Notice the following:

Those disks take different angles, so it's really technical and incredibly dorky.

Something 'dorky' is unfashionable or not popular to use or do. Notice the following: