Wendi talks about her love for sports and Ultimate Frisbee. 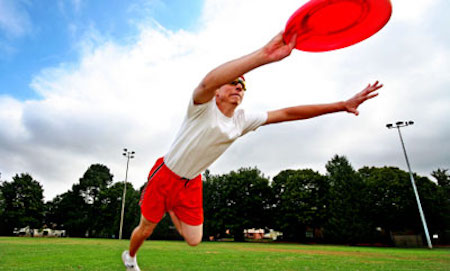 Todd: What sports are you into?

Todd: OK, so a lot of people probably don’t know what Ultimate Frisbee is. Can you explain it?

Todd: And you can play anywhere – in the street or in the park?

Wendi: Well, you can, yeah, you can, like, grab a Frisbee and go throw with it a friend anywhere that you want to but the game of Ultimate Frisbee is played with seven players a side on each team, and yeah, you can play it everywhere.

What sports are you into and what's the last sport you played?

When you are 'into' something, it means that you are interested in it and like to do it. Notice the following:

Ultimate Frisbee is a field sport played on a soccer pitch-type thing.

You can add the phrase '-type thing' after a noun to show that what you are talking about it similar to something that is well-known, but it is not exactly the same. Notice the following:

It's like in the American football, where you'll have to catch it within that end-zone.

The 'end-zone' is the part of the field in American football where the players have to go to score a touchdown. There are two 'end-zones' on a field, and each team is trying to run or throw towards their own end-zone.Notice the following:

There's also a kick off from one team to the other to receive the object.

Once you receive the disk, you must stop running and make a pass to another player.

You 'make a pass' when you throw or kick the ball or disk to another player. Notice the following: