Wendi and Todd talk about their favorite colors and some strange clothes. 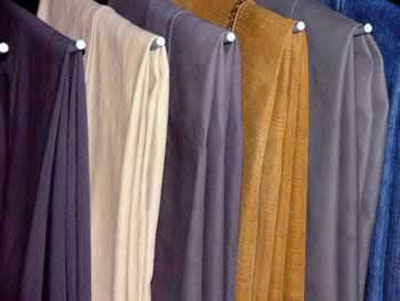 Todd: Yeah. You're the only one here.

Todd: Like seasonally? You have your favorite color for the season?

Wendi: I think it's more of a monthly thing.

Wendi: Why is that?

Todd: I don't know really. Same thing I guess and I never where purple. I mean, I don't have purple clothes. I don't have anything purple in my room, but.

Wendi: You should have a purple suit.

Wendi: Yeah, just for one on those days when you're feeling it. You could pull it off.

Todd: I'm not sure it's going to go with my complexion.

Wendi: No, I think it will work.

Wendi: I see it all right now. It looks good.

Wendi: It is quite baby diarrhea. Have you ever had to change a baby's diaper?

Wendi: Yeah, it's kind of, it's about that color and that's one that I don't like. Yeah, it's bad isn't it.

Todd: That is disgusting.

Wendi: There's a story behind those pants.

Todd: Oh, yeah, what's the story behind the pants?

Wendi: I think no one would buy them so they got heavily discounted and so I purchased them and then when I got home, I was like, "Wait a second! I know why no one else would buy those cause they're so ugly."

Todd: What, you were working at a clothing store?

Wendi: No, I was shopping.

Todd: And you noticed that no one buying these poor pants and you're like, 'I must buy them."

Wendi: Yeah. No, actually, I think like whenever I buy stuff, cause it's not often, my first thing is I look at the price tag and I was like, "Ah, dam, a thousand yen, I could use some work pants." And then I bought them and well, they've never been worn, but a little while later.

Todd: Come on, you gotta, you know bust out.

Todd: Yeah, but you see, I would actually have to spend a lot of money. I would wear the purple suit but I just don't want to go buy it. If I actually had it I'd probably wear it.

Wendi: That's dishonest because if I got you a purple suit, you would not wear it.

Wendi: Oh, now way. There's not way you would.

Todd: Because you know what, the greatest thing about being a teacher is you can wear whatever you want.

Todd: You know because they expect you to have no fashion sense anyway.

Wendi: It is true actually.

You could wear it just for one of those days when you feel you could pull it off. ( i.e. get away with something)

Here, 'pull it off' means to wear, use or do something that is unusual and not have it seem strange. For example, not everyone could pull off wearing tall orange boots, but you probably know someone who would look good in them because of her style or personality. Notice the following:

I'm not sure that color is going to go with my complexion.

Your 'complexion' is the color and tone of your skin. Notice the following:

When you have bad stomach sickness, you will usually vomit or have diarrhea. 'Diarrhea' is a liquid feces or poop that is not normal to have every day. Notice the following:

You noticed that no one was buying these poor pants and you're like "I must buy them."

You can use the word 'poor' like this when you feel sorry or bad for something or someone. Here, Todd is saying that Wendi felt sad for the pants because nobody wanted to buy them. Notice the following:

For me to bust out in those is akin to you busting out in the purple suit.

In this example, 'bust out' means to do something extreme that would surprise people or doesn't follow your usual habits. Notice the following: