Mini talks about her country of Sri Lanka and suggests three things to do there. 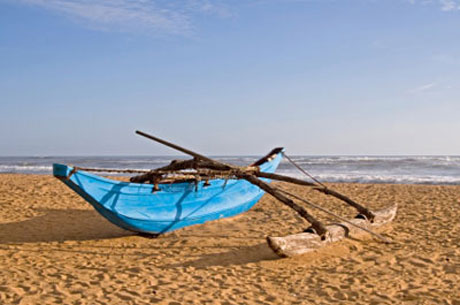 Todd: Now, Mini, you are from Sri Lanka.

Mini: OK, the first thing is you can go and see the ancient things that all the Kings and Queens built, like castles. We have a castle called... it's called the Rock Castle. It's called Sigirya, so it's very beautiful.

Todd: This is the Rock Castle.

Mini: Yeah, it's... the castle is on the rock itself, so you can see the ruins there. It's really beautiful, with pictures, paintings, arts and stuff.

Todd: Oh, really. That's really cool, so this rock castle, how old is it?

Todd: What else should people you see?

Mini: M-hm. I mean, not popular amongst Sri Lankans but most of the... many tourists come, especially the Germans, they come to my country and surf because the hotels near the beaches are very cheap and it's very beautiful hotels and very cheap. Food is cheap. It's nice.

Todd: OK. So, we've got the Rock Castle, surfing on the beach. Anything else?

Mini: And then a third thing should be the Tooth Temple. It's like the tooth of a Buddha, so we got it from I guess India, King Ashoka, so it's one of the things that you can see there. It's a really beautiful temple.

Todd: OK, I'm sorry. Can you say the name of that again?

Todd: The Temple of Tooth Relic.

Mini: It's in Kandy. A place called Kandy.

Todd: Kandy. OK. Well, thanks for the tips Mini.

You can see ancient things.

'Ancient' things have been around for thousands of years or are really really old.  Notice the following:

We have a castle called the Rock Castle.

A 'castle; is a large stone building from past history that we can still visit, especially in Europe.  Notice the following:

You can see the ruins there.

'Ruins' are parts of old buildings that remain after hundreds or even thousands of years.  Notice the following:

all over the place

We have beaches all over the place.

The phrase 'all over the place' means in many different places.  Notice the following:

It's not popular amongst Sri Lankans.

In modern usage we use 'among'. Here 'amongst' is used to describe the feelings within a group of people.  Notice the following:

ancient • castle • ruins
all over • amongst