Fred, Katia and Todd discuss what should be done about the stray cats in their area. 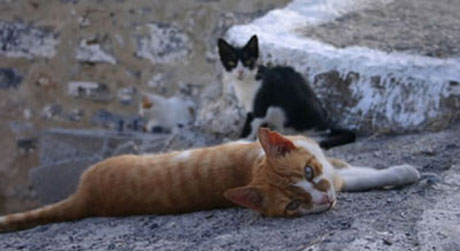 Todd: So, we're here... first of all, how about everybody introduce themselves.

Fred: OK. I'm Fred from Canada and it's a pleasure to be here.

Katia: Hello. I am Katerina. I'm from Mexico and I'm also very glad to be here.

Todd: Thanks guys. And then, I'm Todd. I'm from the U.S. Now for the listeners, we all live really close to each other and we live in a neighborhood, where I guess, all of our houses are probably within two or three minutes of each other.

Todd: So, we thought we would talk about the neighborhood, and the first topic would be the stray cats.

Katia: Which are also are neighbors.

Todd: Right. First of all, how many stray cats do you think there are in the neighborhood?

Katia: At least at night, you see them all together, especially in one corner, and I see at least about six cats, at least, all together.

Fred: I would say much more than that.

Todd: Yeah, I would too actually. How many do you think?

Fred: I would go for maybe twenty of those around the neighborhood.

Katia: But this is just one corner.

Katia: I think especially for a lot of the elderly people that live here, I think for them it's very nice to have the cats around and they feed them and I think as long as they don't go into the trash, I think it's OK, but for me, I haven't seen any trash, and I don't think it would be a problem.

Todd: Well, you know, they break into my house. I don't know if they break into yours, but they're amazing. If I don't lock the windows, the sliding glass doors they pull the door open with their paw and they come in and they look through my trash and then they leave.

Fred: Those are very clever cats.

Todd: Yeah, I thought it was a raccoon. I thought I had a raccoon, and I went to talk to my landlady, and she's like, "No, that's just the cats."

Katia: I think you were just not feeding them.

Todd: Well, yeah, I guess that's it. Like, they're so hungry that they break into people's houses for food.

Katia: OK, I don't have that problem. I live on the third floor.

Katia: So, maybe that's why.

Fred: I don't have that problem either, although I do live in a house similar to yours, Todd, where we live on the first floor and there is a lot of stray cats around the neighborhood but I've never had any problems of them breaking into the house.

Todd: Yeah, I don't know. They're pretty amazing. Like, I did not even know that cat's could break into a house, but they can.

Todd: Yeah. Or very hungry cats, as you said.

Katia: Or friendly cats. They want to visit.

The first topic is stray cats

A 'stray' animal or pet has no home and lives on the street.  Notice the following:

this is just one corner

This is just one corner multiplied by twenty-five.

When we talk about only one of many, we use the term 'this is just one'.  Notice the following:

nice to have around

It's nice to have cats around.

When people or pets are 'nice to have around,' that means we enjoy being together with them.  Notice the following:

I talked to my landlady.

A 'landlady' is a woman who owns the house, condo or apartment we rent.  Notice the following:

I've never had any problems

I've never had any problems of them.

We use the phrase 'I've never had any problems' with someone or something when our experience has always been positive.  Notice the following:

stray • just one • a dog around
landlady • any problems