Jake and Lindsay share their thoughts about hunting and killing animals for food. 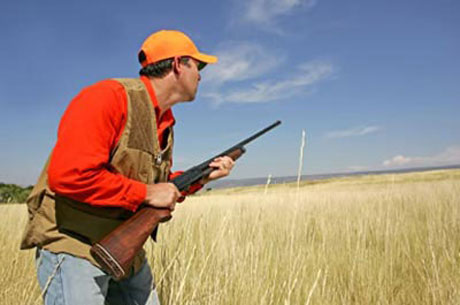 Lindsay: So, Jake we were just talking about zoos. Now, I'm curious. What do you think about hunting? Do you like hunting?

Jake: Not really. I know a lot of people who do hunt though.

Lindsay: What do they hunt?

Lindsay: Do they use a gun or a bow and arrow?

Jake: They use guns.

Lindsay: Yeah, I don't know about hunting. I'm not a really big fan of hunting.

Jake: Yeah, a lot of people enjoy it I guess, and plus they get to eat the animals after they hunt them.

Lindsay: Yeah, my father was a very big hunter. He actually kept a big rifle gun and would go pheasant hunting twice a year. He would always come back with this nasty pheasant and put it in our freezer but my mom never knew how to cook it so it would just stay in our freezer forever.

Jake: So you never ate the pheasant?

Lindsay: We never ate the pheasant. But in general both my mom and I were very upset with my father for hunting. We just didn't think he needed to go out and shoot poor animals.

Jake: But he must have really enjoyed it to go against you and your mother's wishes and go hunting all the time.

Lindsay: That's a good point. He did really enjoy it and basically he just did what he wanted to do, but have you ever eaten a hunted deer?

Jake: Yes, I have, and it was pretty good actually.

Lindsay: Does it taste different than cow?

Jake: It's not the same as cow definitely, but it's not a really unusual tasting meat either, I would say.

Lindsay: OK, so someone went and hunted the deer and then served it to you?

Lindsay: And that was OK for you?

Jake: Yes, it was OK for me because I eat cow and chicken all the time and I don't see how that's different.

Lindsay: Yeah, but this deer was in the wild, and what if it was a mother?

Jake: Well, some of the cows that we eat are mothers as well.

Lindsay: You think so? I never really thought about that. I guess you're right, but something about the idea of going out and shooting a poor deer. It just reminds me of Bambi. It's so sad.

Learn Vocabulary from the Lesson
Notes Not Yet Available
Answer the following questions about the interview.