Diego and Rebecca compare beach life and tourist attractions in their countries. 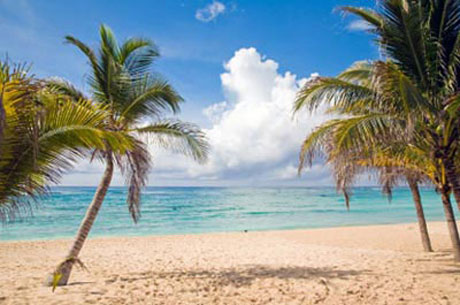 Rebecca: What are you going to do for summer break?

Diego: Yeah. What about you?

Rebecca: I will go back to Australia, and I'll probably go the beach of course because Australia has such beautiful beaches.

Rebecca: Yes. Everybody knows that. On the East Coast. The best beaches. Does Mexico have any beaches?

Diego: Yeah, yeah. We have really, really nice beaches down by the Caribbean Ocean, like in southern Mexico, there's this beautiful place called Cancun and the Ocean is really, really blue, like baby blue, and the sand is white so it looks like snow. It's a really amazing place.

Rebecca: Can you surf at the beach?

Diego: I'm sure you can surf in some places, yeah.

Rebecca: What about snorkeling?

Diego: Yeah, definitely. It's the Caribbean Ocean so the water is transpiring so it's amazing. It's like looking at the sky and it's together with the ocean, ...

Rebecca: Well, have you been to the Great Barrier Reef?

Diego: I've heard about it, but I've heard that it's the biggest one in the world.

Diego: Well, we have the second biggest one in Mexico.

Rebecca: Aaahhhhh! This could be turned into a debate on who has the best beaches.

Diego: Maybe so. But what I like about this place called Cancun, is it has a lot of history. Have you ever heard about the Mayan civilization.

Diego: It's an ancient civilization that was settled in Southern Mexico, so this is where the ruins are they were very advanced people. They knew how to predict the eclipses for the next three hundred years, and they just vanished. They just disappeared.

Diego: Yeah! And there's a new movie directed by Mel Gibson, Apocolypto. It's about their civilization.

Rebecca: Oh, OK. No, I haven't seen that movie at all. Well, I suppose I could go and compare our beaches. Go to Mexico and check out this place. What was the name of it again?

Diego: Well, we could do a home exchange. You can go to Mexico and I can go to Australia.

Rebecca: OK, let's do that.

Diego: Yeah, let's do that.

Rebecca says everybody knows that Australia has beautiful beaches.

We use the phrase 'everybody knows that' to talk about a fact that's very well known.  Notice the following:

We have really nice beaches down by the Caribbean.

'Down by' means near a place or a thing.  Notice the following:

The Ocean is baby blue.

I've heard that it's the biggest one in the world.

We hear information from other people, radio, TV, the internet, etc.  Notice the following:

They were very advanced people.

Here, 'advanced people means a past civilization that was more modern than others at the time.  Notice the following:

everybody knows • down by • baby blue
I've heard • advanced