Jake talks about his love of video games with Lindsay and gets her opinion too. 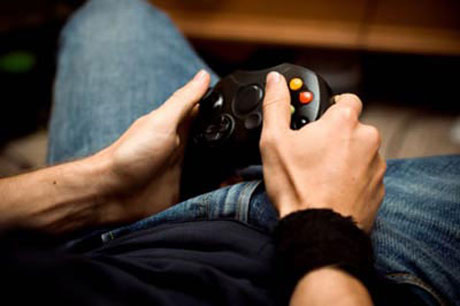 Lindsay: So, since we are talking about technology, I have a question for you. Is there any gadget or technology that you're really addicted to?

Jake: That would have to be video games. I have pretty much every video game console that was releases since the late 80's.

Lindsay: Are you serious?

Jake: Yes. Every one of them.

Jake: Why not? They're fun.

Lindsay: I don't know. I used to when I was a kid, but recently they just don't appeal to me... to sit in front and like, use my thumb to press this thing to make it jump and I guess I'm just not very good at them.

Jake: Well, they're getting more and more involving now, it's kind of like having an interactive movie except you get to be the main character in the movie.

Lindsay: Yeah, I guess. I need to get used to it. I'm really bad at them right now, so I'm just not comfortable with them.

Jake: Yeah, I know what you mean. One thing I've noticed a lot with games lately is that they're so complicated to control that you have to be like a hard core gamer to even begin to understand how to play the game.

Lindsay: Do you think you're a hard core gamer?

Jake: I would have to say I am though I'm not exactly proud of it.

Lindsay: Oh, really. What constitutes a hard core gamer? How often to you play?

Jake: Pretty much, well, probably for most hard core gamers, it would be every day.

Lindsay: Every day. How many hours?

Jake: An hour or two, at the least.

Lindsay: OK, what about you? How often do you play every day?

Jake: Well, since, I'm working, there are lots of days when I don't play at all, and I would like to be able to play more.

Lindsay: OK, so one of your goals in life is to play more video games?

Jake: No, I wouldn't say that but it's a good way to relax and sometimes it's more fun than just watching TV when you have nothing better to do.

Lindsay: OK, so you play... try to play every day but sometimes you don't and then, are there any tips you can give me to become a good video gamer?

Jake: Well, just the more you can play, the better you'll get. I don't necessarily want to play more because as you know there isn't really any reward for playing games more.

They just don't appeal to me.

Something that 'appeals' to us is something we like or think we might enjoy.  Notice the following:

They're getting more and more involving now.

Actually, correct grammar demands the past participle form of involve, so we say more 'involved'.  Something that is 'involved' is complicated or in this case technical.  Notice the following:

I need to get used to it.

To 'get used to' something means to become comfortable with it.  Notice the following:

You have to be a hard-core gamer to understand.

'Hard-core' means very serious. It can be positive or negative.  Notice the following:

I'm not exactly proud of it

I am, though I'm not exactly proud of it.

To be 'proud' means to be happy with something we are or have done. The opposite is of course, not proud.  Notice the following:

What constitutes a hard core gamer?

When we ask what 'constitutes' something, it's similar to asking for a definition.  Notice the following: