Do you play music?

Josh talks about the kinds of music he likes to listen to and what music he can play. 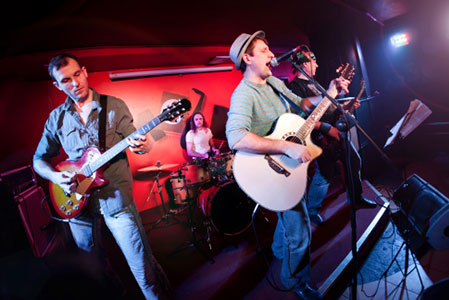 Shirley: So Josh, I know that you like to play the guitar.

Josh: Mostly, I play rock but sometimes, I play pop music as well.

Shirley: Cool. So who is an artist that you like?

Josh: My favorite artist at the moment is Jason Mraz.

Shirley: Okay. Where does he come from?

Josh: He comes from the States, the US. He plays guitar and sings at the same time.

Shirley: Cool. Okay, do you play any other instruments?

Josh: I do. I play the piano as well.

Shirley: So when you play piano, do you like to sing as well?

Josh: I don’t usually sing when I play piano because I’m not as good at the piano.

Shirley: Oh, I see. So like guitar better than piano or you’re better at it?

Shirley: Okay. Do you have a band?

Josh: I don’t have a band, but I hope someday, I will.

Shirley: Do you have a name for your rock band?

Josh: No, I haven’t really picked one up yet.

Shirley: What about Josh and the Jammers?

Josh: That sounds okay, but it’s a little long.

Cool. So who is an artist that you like?

The listener might say 'cool' to show they are interested in what the speaker says.Notice the following:

The listener says 'nice' to show they are interested in what the speaker says. Notice the following:

Do you play any other instruments?

We use 'better at' to compare abilities. Notice the following:

I haven’t really picked one up yet.

Pajamas are clothes you wear to bed. Notice the following:

#1335 Tacoma is Home
Josh talks about his hometown.
BEG 3
Diego

Video 1335
What's the best place in your country?

#1339 Pet Peeves on the Bus
Jeremy talks about things that annoy him.
INT 6
Sorie Mark

#1337 Big Family
Sorie talks about living in a big family.