Jeremy and Abidemi compare times in their lives when they drove cars and did not drive cars. 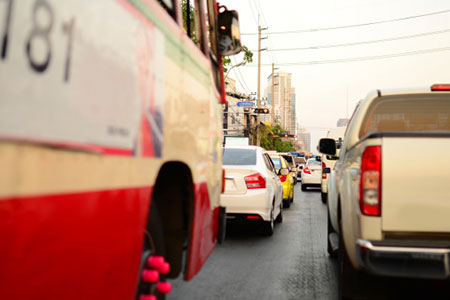 Abidemi: So Jeremy, you don’t have a car now but you had a car when you were younger. How do you find that?

Jeremy: Well, I mean, the reason I don’t have a car now is because of money. I can’t afford a car at this point. But it’s been many years since I actually owned a car. And I’ve gotten really used to taking public transit. And when you don’t have a car for several years, you just get used to it and then I can sort of justify it to myself saying, “Well, I’m doing my part for the environment. I’m not emitting all those emissions onto the atmosphere, so this is small, small part for the world.”

But then when I think about how I can’t take a road trip up into the mountains or go to the ocean or just enjoy my freedom, or I can’t have 15 minutes where I get to listen to my own music and sing along in the car or just have that time to spend to myself, I really, really miss it, honestly. Some of my best times from my youth were actually just driving around with my friends. And I don’t get that anymore. And even just to go out and pick something up from the supermarket on a rainy day, I don’t have that convenience anymore. I mean, it’s not the worst in the world not having a car but sometimes, I really, really miss it.

Abidemi: That’s true. I think my story is the opposite of yours actually, Jeremy. For the longest time, I didn’t have a car or transportation. All I had was my bike or walking everywhere. And although I enjoyed that, I envied my friends who had cars and could just take off at any moment, go wherever they wanted to. Now I have a scooter and I absolutely love it. I would prefer a car on some days, it’s true, on those days or when it’s really cold and I need the heat of a car. But the convenience of having my scooter and the fact that it’s so cheap. I can go anywhere, anytime. I don’t have to look for parking. The parking is free. I can leave it on the side the road somewhere and find it there and don’t have to pay for parking. Yeah, I really enjoy that.

And it just feels cooler. I think wherever I live, wherever I go now, I would—even if I do buy a car someday, I would always want to have a scooter or a motorbike because it's just something—I don’t know, exciting.

Jeremy: As a scooter driver though, do you ever feel intimidated by the cars on the road? I mean, is it dangerous do you think driving a scooter around?

Abidemi: That is a very good question. It’s true. When you talk about road rage, people being—road rage is one thing when it’s car versus car. But when you’re on a scooter and you can’t go as fast as the other drivers, and they are behind you. Although, they’re very polite, sometimes, they don’t honk but you can feel them coming behind you.

So I try to drive as close to the edge as possible. At times, I just had to pull over because I don’t want you to hit me. I know you want to get to where you want to go and you’re faster than me. So I just pull to the side, let the car pass and just go my way. So it’s true. It is safety. You have to be really safe and conscientious and just have to pay attention to what you’re doing.

Jeremy: Sounds like you have the right attitude as a scooter driver.

It's not the worst (thing) in the world

It’s not the worst in the world not having a car.

When something is 'not the worst thing in the world,' it is not as bad as it seems. Notice the following:

I envied my friends who had cars

When you envy someone you are jealous of them. Notice the following:

Do you ever feel intimidated by the cars on the road?

When you are intimidated, you feel inferior or weak. Notice the following:

Road rage is one thing when it’s car versus car.

Road rage is when people get very upset because of driving conditions. Notice the following:

At times, I just had to pull over.

To pull over means to stop the car on the side of the road. Notice the following:

You have to be really safe and conscientious.

When you are conscientious you think deeply if your actions are right or wrong. Notice the following:

not the worst • envy • road rage
intimidated • pull over • conscientious

#1339 Pet Peeves on the Bus
Jeremy talks about things that annoy him.
INT 4
Kadi

Video 1340
What is your favorite car?
BEG 3
Gisela