Sorie and Mark talk about brothers and sisters and how their age affects her relationship with them. 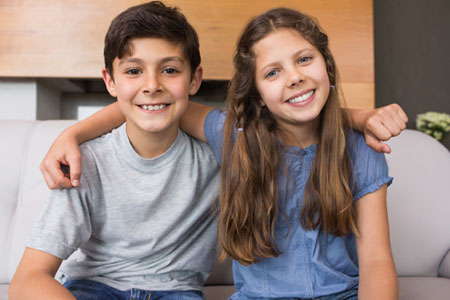 Mark: So you were talking about how you got five brothers. Do you have a different relationship with each one of them?

Sorie: Yeah, definitely. They all range in age, so the oldest is 26 years old and the youngest is six years old. So I’m closer to my closest brother but they all have different personalities. And I have a great relationship with each one of them.

Sorie: Definitely. As I told you, my youngest brother is six years old. And my neighbors, they used to think that that was my child because of the difference in age. And I would be carrying him around and I would change his diapers. And when my mom was out, I was the one taking care of them or when my mom was sick, I was the one making their meals.

And still have a different kind—I feel a different love for them than the love I feel for my brother. I feel like he’s more like a friend. I can talk to him; I can share my experiences with him. We’re close in age so we have a lot of similarities. And with my younger brothers, they often ask for advices and they want me to give them a little bit of my knowledge. So it’s very different with each one of them.

How about you? You said you had only one sister.

Mark: Yeah. I have one sister and she’s older than me. Definitely, there’s no sense of motherliness from her. I didn’t feel that at all. And we were just totally independent. I was a boy and she was a girl. She did girl things, I did boy things, and then we just lived in the same house.

Sorie: What’s the age gap between the two of you?

Sorie: What’s the relationship you have with her right now?

Mark: The relationship I have with her right now—well, we live in different countries, so we’re so far apart. And she now has children, and I don’t have any children but we still intermittently keep in touch with each other. And it’s the same kind of feeling, the same, like; familial love obviously is very present. But it doesn’t—we don’t—I don’t know. You spoke about you’re talking to your brother about lots of things that you’ve been up to. And perhaps, I don’t talk to my sister about things, and I talk to my wife and my friends about those things. So it’s more like she’s my family rather than my friend.

Sorie: I see. Did you ever wish to have any brothers?

Mark: No. I just took it as it came. It wasn’t my choice, so I didn’t wish for any brothers or sisters anymore. She’s just my older sister. But I had lots of friends. Friends are very important to me, so my friends are like—my male friends, when I was younger, they’re like my brothers really. So it didn’t matter that they weren’t part of my family like an extended family.

They all range in age.

What’s the age gap between the two of you?

An age gap is a difference in two people's ages. Notice the following:

Intermittent means from time to time, but not regularly. Notice the following:

We still keep in touch with each other.

Keep in touch means to stay in contact by phone, mail, or correspondence. Notice the following:

Things you’ve been up to.

take it as it comes

I just took it as it came.

When you take something as it comes, you have no special feelings about it. Notice the following:

Video 1338
Do you ever fight with siblings?
INT 4
Teru

Video 1337
Would you like to have a big family?

#1339 Pet Peeves on the Bus
Jeremy talks about things that annoy him.
BEG 3
Josh Shriley