Michael talks about a movie that deals with a serious topic and why it was a good movie. 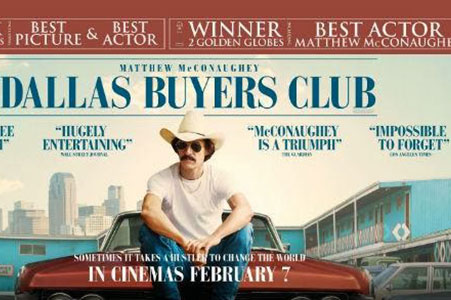 Ana: So Michael, I heard you really enjoy going to the movies. What kind of movies do you like?

Michael: I like many kinds of movies. But actually, I enjoy going to movies, but these days, I'm so busy with work that I don't really get to see that many movies in the cinema. But when I fly on an airplane, I like to watch many movies in one night.

Ana: Oh really? Wow, okay. Can you tell me about a movie you've watched recently on an airplane?

Michael: Yes. The last time I flew in an airplane, I watched a movie called the Dallas Buyer's Club.

Michael: Well, it's about HIV and AIDS. And it's basically about the early years of new drug treatments for people with AIDS. And the story is about an American guy in Dallas or in Texas.

Michael: Oh yes. Sorry, I don't – I'm from South Africa so my knowledge of America isn't that great. But yeah, it's about someone who's been diagnosed with HIV and then how he sort of comes to terms with it and how it's difficult for him to accept at first. And then he starts undergoing treatment for it, experimental treatment.

Ana: Oh yeah, I think I've watched the trailer actually. It's really interesting. So what did you think of it? Did you like it?

Michael: Yes, yes. I thought it was a very good movie. And it deals with some difficult topics or some maybe upsetting topics but overall, it was a very interesting movie to watch. And I think the acting is also very good in this movie. Do you know the name of the actor? I forgot his name.

Michael: Ah yes. And did he win an Academy Award for that?

Ana: Yes, he did. I think he just recently won several awards for his performance in that movie.

Michael: Hmm, that was very impressive.

Ana: So earlier you said that the movie talks about some difficult topics. Could you tell me what those are?

Michael: That's true. Well, the whole question of AIDS, and how society dealt with it at that time before it was a widely known disease.

Ana: But I think it also focuses on the treatment of AIDS, and what's available out there, doesn't it?

Michael: Yes. At that time, there were different drug treatments available. There were actually not that many available but they started doing trial runs in hospitals of different kinds of drugs. But I think that's part of the drama in the movie but some patients were given the real drug and some patients were given placebo drugs or sugar pills. And then, it also it sort of the whole question of ethics in medicine and that some people have to die of their disease before a medicine can be approved – before it can be proved that the medicine is effective in the first place.

Michael: It talks about some maybe unpleasant topics.

Ana: Oh, that sounds very somber. Do you still recommend I watch it?

Michael: Well, yes, I think so. It's exactly a feel-good or a happy movie but I think it raises people's awareness of how sufferers of HIV and AIDS had to deal with it and what sort of issues they faced and still face today even though the treatments have improved a great deal since the time depicted in the movie at least.

It's about the early years of new drug treatments.

A treatment is a medical plan to cure an illness or condition. Notice the following:

He has been diagnosed with diabetes.

When a condition is diagnosed, it is medically or professionally identified. Notice the following:

It deals with some upsetting topics.

An upsetting topic is hard to watch or makes you feel sad or uncomfortable. Notice the following:

A trial run is an experiment. Notice the following:

To improve a great deal means to improve a lot. Notice the following:

#1344 The Gilded Cage
Ana shares a movie about being Portuguese.
INT 4
Abidemi

Video 1344
Can you recommend a movie?
BEG 3
Christina

Video 1343
What is your favorite movie?

#1345 The Weekend
Shirley talks about her weekend.
INT 6
Aimee / Paul

#1341 E-Mail Overload
Paul talks about keeping up with e-mail.