Ana talks about a movie she liked that deals with Portuguese people living in France. 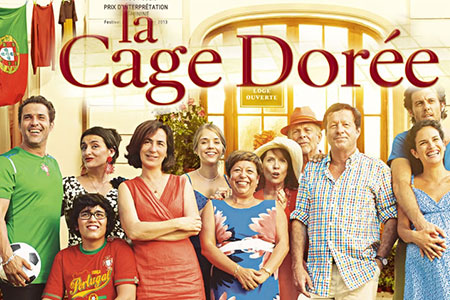 Michael: So Ana, you're from Portugal, right?

Michael: I was wondering, I really like movies; are there any good Portuguese movies that you can recommend.

Ana: Well, actually, now that you mentioned it, there is a really nice Portuguese movie that came out recently, I think last year.

Ana: Yes. It was actually filmed in French and Portuguese because it's about a Portuguese family living in France. So you can have it both in Portuguese and in French. It's very interesting.

Michael: Okay. And what's the story about?

Ana: Well, a lot of Portuguese people have had to move to different European countries to find jobs. So it's about one of these families. And the main couple, they moved to France to find jobs and now, I think, 14 years have passed and they have two children.

Ana: And yeah, the children were born in France, and raised French-Portuguese. And it's about their internal conflict, about their identities and whether they are French or Portuguese. So actually, the family is given the opportunity to go back to Portugal. So they need to think about the pros and cons of leaving France; all the friendships that they have created, the jobs that they have in contrast to – yes.

Michael: And this seems like an issue that many people will be able to identify with because there are many people leaving the country these days because of economic reasons, right?

Ana: Yes, I think so. I talked to some of my friends about it and my friends that are in Portugal, they think it's quite a funny movie. But my friends who've left the country, they actually cried a lot during the movie because they could identify with the feelings of loneliness and being away from your country, your culture, your family.

Michael: So you live outside of Portugal, how did you feel when you watched this movie?

Ana: Well, it's a comedy, so I laughed a lot. But there were some difficult moments actually where I felt that my personal feelings and my personal experience were being targeted or just, you know, those issues of how I feel about my country and how I feel about living outside of Portugal.

Michael: So it stirred some strong emotions for you.

Ana: Yes. It was very difficult actually. And I couldn't stop thinking about the movie in the next few days. And it also helped me think where I was in my life now and whether I would go back. So for me, it was also a turning point.

Michael: All right. That sounds like a very good movie. Would you recommend it to people who are not Portuguese as well?

Ana: I do. I think that for most people who leave their countries, these people, they shared the feeling, they always leave something behind. So I think it will be able to reach different audiences from different countries.

Michael: All right. So for anyone feeling a little homesick, it's a good movie to watch.

It's about their internal conflict.

An internal conflict is when you have two feelings about the same situation. Notice the following:

They need to think about the pros and cons of leaving France.

The pros and cons are the good points and bad points about doing something. Notice the following:

They could identify with the feelings of loneliness.

When you indentify with something, you understand it from a personal point of view. Notice the following:

My personal experience were being targeted.

Something that is targeted is the focus on one's effort. Notice the following:

It stirred some strong emotions

To stir means to move something within a place. Notice the following:

For anyone feeling a little homesick, it's a good movie to watch.

When you are homesick, you miss your home or the area where you grew up. Notice the following:

Video 1344
Can you recommend a movie?
BEG 3
Christina

Video 1343
What is your favorite movie?

#1345 The Weekend
Shirley talks about her weekend.
INT 6
Aimee / Paul

#1341 E-Mail Overload
Paul talks about keeping up with e-mail.